Boy, if you’re looking for a roller coaster ride you can forget your local theme park.

Up, down, and back up again.

There’s a lot of volatility there right now due to lower oil prices which is a result of oversupply and lower demand.

But in volatility oftentimes lies opportunity.

[ad#Google Adsense 336×280-IA]And we may just have such an opportunity on our hands today.

There appears to be some cheap stocks in energy, but how do we know if they’re cheap?

Well, we have to go about valuing the business.

And in case you’re unaware as to how one would go about doing such a thing, you can find a great tutorial on that right here on the site, courtesy of David Van Knapp.

It’s important to value a company before you buy its stock.

Otherwise, you don’t know if you’re paying an appropriate price.

After all, you wouldn’t go down to your local grocery store and pay $50 for a loaf of bread, right? That’s because you know that a loaf of bread is worth a couple of dollars. Maybe $10 if it’s some kind of rare-grain bread baked by some master baker out of France. Otherwise, it’s worth a dollar or two.

Value and price are very rarely one and the same when it comes to stocks, so it’s always important to determine the former before you pay the latter.

I’ve independently valued each and every single stock in my personal portfolio before rushing out to buy any of them, and this process has treated me well thus far.

In the spirit of constantly building my portfolio, I often browse David Fish’s Dividend Champions, Contenders, and Challengers list – where you can find well over 500 US-listed stocks that have increased their respective dividends for at least the last five consecutive years – for new opportunities.

And sometimes I come across a stock that appears to be priced at less than its intrinsic value. But I’m not going to keep this stock to myself. I’m going to share this idea with you readers.

Exxon Mobil probably needs no introduction. They are a $384 billion company that operates across the entire world. They are one of the biggest companies on the planet.

But what perhaps does need introduction is their lengthy dividend growth streak.

For the past 32 consecutive years, XOM has delivered shareholders a dividend increase. That’s pretty astounding when you consider the boom-bust-boom cyclical nature of the oil industry.

And over the last decade alone, the dividend has increased at an annual rate of 9.6%.

That kind of growth is especially impressive when you consider the stock yields 3.06% right now.

Factor in a payout ratio of 34.7%, and you have excellent dividend fundamentals here.

Not only is the dividend secure (even if earnings drop precipitously), but the yield and growth is top-notch.

The one area of concern for XOM, along with other supermajors, is the fact that the price of oil has fallen quite dramatically over the last few months. So I suppose you’d have to ask yourself if you think the world will continue to run on oil and gas for the next few decades. I’d say the odds are good, which means the long-term price of oil should continue to rise with global demand (even though temporary funks with supply and demand may cause fluctuations).

Now, dividends aren’t manufactured out of thin air. A company has to profit with real cash in order to pay out cash dividends.

So let’s see what kind of profitability ExxonMobil has generated over the last decade. The growth here will immensely help us determine what the company is worth as well.

Revenue was $298 billion in fiscal year 2004. It grew to $438.3 billion by the end of FY 2013. That’s a compound annual growth rate of 4.38%. Not bad when you consider the cyclical nature of the industry and the already massive size of XOM, though oil has risen quite a bit from the beginning of the decade.

Meanwhile, earnings per share grew from $3.89 to $7.37 during this same period. That’s a CAGR of 7.36%. So the dividend is increasing at a slightly faster rate, which means the payout ratio is expanding a bit. The ratio is still low enough to allow this for a while longer, but eventually the dividend will have to grow in kind with EPS.

S&P Capital IQ predicts EPS will compound at a -2% rate over the next three years. This sentiment seems to be driven by volume growth concerns as well as lower oil prices.

One aspect about XOM that is rock solid is its balance sheet. The long-term debt is negligible and it’s one of only three US companies with a AAA rating from S&P. One of three. Of the thousands out there, only three. They have a fortress for a balance sheet.

Exxon is sometimes hard to compare with peers because they’re kind of in a league of their own. But their profitability is robust and compares well to anyone. Net margin has averaged 7.87% over the last five years, while return on equity averaged 23.1%.

Not much to really dislike here, other than the volatility that being exposed to a commodities like oil and gas present. But, as I stated earlier, volatility can present opportunity.

The dividend metrics are pretty outstanding and the growth is excellent when you consider the large base from which ExxonMobil is working with and the cyclical nature of their industry.

So a stock this high in quality must trade at a premium, right?

Shares in XOM trade for a P/E ratio of 11.34. XOM almost always trades for a significant discount to the broader market, as its five-year average is 12.3. We need to know more than this.

I valued shares using a dividend discount model analysis with a 10% discount rate and a 7% long-term growth rate. That rate is in line with XOM’s growth in earnings over the last decade, which is about the rate at which the dividend can grow over the long haul. Though EPS may drop with lower oil, the payout ratio is low enough to cushion any temporary setbacks. The DDM analysis gives me a fair value of $98.44.

So my analysis seems to indicate that XOM is undervalued here. But what if I’m way off?

Let’s see what some professionals in this field seem to think of XOM’s valuation here.

These stars are meant to coincide with predicted returns, as a stock that is substantially overvalued will likely lead to subpar returns.

It seems I’m right in the middle there. If you value out the three numbers, XOM’s fair value could be reasonably estimated to be around $99.64. Looks like I was pretty close. That number would mean XOM is potentially a bit more than 10% undervalued right now. 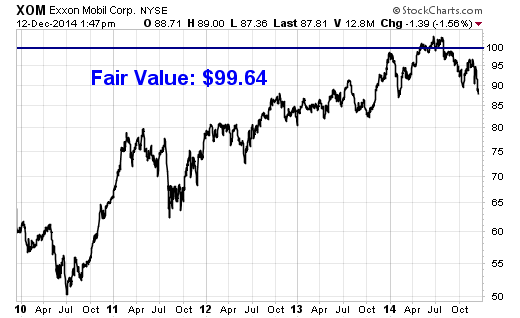 Bottom line: ExxonMobil Corporation (XOM) has an outstanding ability to weather commodity storms, as their results are fairly smooth for such a cyclical industry. Furthermore, the dividend has plenty of cushion in case earnings take a dive from lower oil prices. The ride could be a little bumpy along the way, but this stock appears undervalued and poised to offer very solid returns over the long haul for those willing to tolerate the ride.