There’s one big fundamental reason I like to focus my capital on companies that have lengthy track records of increasing dividend payouts to shareholders.

Doesn’t that word “cash” just roll off the tongue?

While we all love cash, the payments themselves are a mechanism of quality control. Dividends are basically the “proof in the pudding”.

You can’t pay a group of shareholders increasing cash payments for decades on end without simultaneously improving profit over that same stretch.

As such, companies can’t magically come up with the cash necessary to cover dividend payments if they’re not generating it.

So I’m personally staking my early retirement on high-quality companies that have demonstrated an ability to increase profit and dividends to shareholders for lengthy periods of time.

You can find a host of these types of companies on David Fish’s well-known Dividend Champions, Contenders, and Challengers list.

This document tracks and compiles more than 500 US-listed stocks that have increased their respective dividends for at least the last five consecutive years. Many companies have decades of dividend growth under their belt.

And we’re going to take a look at one such company today.

Illinois Tool Works Inc. (ITW) is a diversified manufacturer of a range of industrial products and equipment, with operations across 56 countries.

ITW is really unique in that it operates a highly decentralized business, with 60 business units all operating somewhat independently of one another. This allows them to focus on their individual clients, and able to respond and/or change in a rather rapid manner, depending on market conditions.

This decentralized model may come across as surprising, considering that most major companies operate in a strict hierarchy, where everyone reports up the chain. However, that method of management can be a bit clunky at times, which makes response to the marketplace potentially slow.

But you can’t argue with ITW’s success, as we’ll discuss below.

Earnings per share increased from $2.20 to $3.63 during this period. That’s a CAGR of 5.72%. Again, because ITW operates a highly cyclical business, the financial results will change depending on the period you’re using. For instance, EPS in FY 2012 was $5.27.

S&P Capital IQ predicts EPS will compound a 7% rate annually over the next three years. That seems perfectly reasonable to me, and could be aided by an attractive buyback policy – the company is selling its packaging unit for $3.2 billion and plans to use the cash to buy back ~50 million shares.

But what about the dividend? What’s ITW’s track record with increasing its payout? After all, the business is cyclical, so are they managing that with a simultaneous policy of growing its dividend in a more secular manner for a lengthy period of time?

Check this out: The company has increased its dividend for the past 40 consecutive years. The company’s results may be a bit lumpy from year to year, but the dividend sure isn’t. As a shareholder in this company, I certainly appreciate that.

Over the last decade, the dividend has increased at an annual rate of 12.9%. Nice!

The stock only yields 2% right now, so it probably flies under the radar for a lot of investors.

But a rather moderate payout ratio of 44.3% and a growing business means it’s fairly likely the company will continue that dividend growth streak for the foreseeable future.

ITW’s balance sheet is very solid, especially for an industrial firm. The long-term debt/equity ratio finished FY 2013 at 0.29, while the interest coverage ratio was 10.82. Overall, very good numbers here, though I would prefer to see slightly higher interest coverage.

The firm’s profitability is quite sound. Net margin has averaged 10.68% over the last five years, while return on equity averaged 17.94%. Both metrics compare favorably to peers.

The company’s products are broad and diverse. They manufacture products including automotive-related fasteners, adhesives, polymers, arc welding equipment, equipment used for testing and measuring of materials and structures, and commercial food equipment. Many of these products are marketed via brands like Hi-Cone, Permatex, and Zip-Pak, and they’re leaders in their respective fields.

I often talk about investing in companies that form the backbone of the economy, those that allow other companies to properly conduct their own business. And ITW is one of those companies.

Their business isn’t unique just in its decentralized business model, but also in what it calls its “80/20 Business Process”. This process is along the lines of the Pareto Principle, as ITW focuses on the 20 percent of its customers that generate 80 percent of its revenues. From a profitability standpoint, this makes sense. They structure their businesses around this concept, which means that the building of relationships can be deep and lasting.

The company appears to be operating at a pretty high level. However, special caution should be paid to its cyclical nature, as that’s a primary risk. In addition, its decentralized business model could be a risk in itself, especially seeing as how some of the individual businesses seem somewhat unrelated to one another.

ITW shares are trading hands for a P/E ratio of 21.92 here. That’s a good bit above ITW’s five-year average of 17.7, so shares could be pricey here. 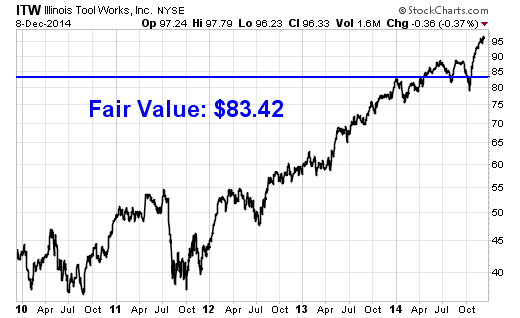 Bottom line: Illinois Tool Works Inc. (ITW) has been increasing its dividend for the past 40 consecutive years, and the odds look good that they’ll continue boosting its payout for the foreseeable future with a low payout ratio and growing business. In addition, they manufacture a broad and diverse array of industrial equipment, which means they’re exposed to many different areas of the economy so that no one area can overly impact the business. And they’re doing all of this without overuse of leverage. Although shares appear a bit expensive right now, this is a very high-quality company that should be considered on pullbacks.