When China wants its stock market to go up, it goes up… A lot.

I’ve written that many times in my career… Because I’ve seen it happen many times. And investors who saw it happening each time made a lot of money.

Two weeks ago I told you a few reasons why Chinese stocks could soar, thanks to the Chinese government.

Specifically, history shows that Chinese companies that trade in Hong Kong tend to soar when this happens.

The Hong Kong listed Chinese stocks – the Hang Seng China Enterprises Index, specifically – are down 47% since peaking in 2007.

The Chinese government has decided it’s time to do something about that… And a rate cut is another tool to help boost the Chinese economy and stock prices.

You see, over the past 20 years, China has cut rates 13 other times. On average, those rate cuts led to 27% gains a year later in the Hang Seng China Enterprises Index. The table below has the full details… 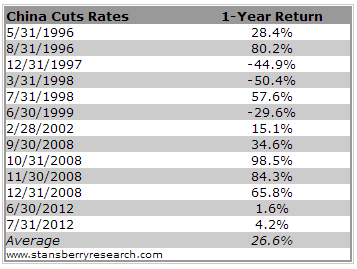 Of the 13 rate cuts, only three led to negative one-year returns. Yes, those three were bad losses. But that’s why we use stop losses.

The important thing is, Chinese stocks increase 77% of the time a year after rate cuts. And the average gain is 27%.

Again, these gains are NOT from the A-shares market I’ve written about recently. They’re from Hong Kong-listed Chinese companies… the massive blue-chips in China.

You can easily buy this group of companies with the iShares China Large-Cap Fund (FXI). This fund holds multi-billion dollar Chinese companies like China Mobile and Bank of China. It’s the Dow Jones of China.

China just cut interest rates. And based on history, these companies have returned an average of 26% over the next year when that happens.

Check out shares of FXI if you want to make the trade.