The more the broader stock market advances, the more difficult it is to find fairly valued or undervalued high-quality dividend growth stocks.

But we’re not buying the market, are we?

Well, I can tell you that I’m not.

I’m a dividend growth investor that invests in individual high-quality companies that both pay and regularly raise dividend payouts. It’s this strategy that has allowed me to build my six-figure portfolio over the last few years on a modest income.

[ad#Google Adsense 336×280-IA]So I’m more concerned with individual stock valuations, and I’m willing to bet you are as well.

If that sounds like you, the first thing you want to do is become comfortable with valuing stocks.

After all, if you can’t value a stock, how would you know whether it’s expensive or not?

A primer has been already put together for you on stock valuation by David Van Knapp, which is recommended introductory reading.

After all, everything in this world that’s for sale has a price.

Likewise, those same things have some type of intrinsic value.

I mean you wouldn’t pay $500,000 for a house that you know is only worth $200,000, right? If you take the time to look at comparables, scout the neighborhood, get an inspection, and pull up public records on a house’s history, you can very likely put together a good idea as to what a house is worth. Furthermore, you can even have a professional appraiser give you their opinion. Thus, nobody in their right mind would pay far more than what that asset is worth.

The same goes for stocks. If a stock is only worth $50, then it obviously wouldn’t make sense to pay $75 or $100 for shares. That would likely lead to poor returns, especially over the short term.

More to the point, you can see why it would be in your interest to only pay $40 for a stock that’s worth $50. Not only will the yield be higher at $40, but you’ll have automatic appreciation built right in when the market eventually recognizes the value of that stock, plus the natural appreciation from improving business operations over time.

I often scan David Fish’s Dividend Champions, Contenders, and Challengers list for such “deals” – high-quality dividend growth stocks being priced at less than what they’re worth.

And I just found one. Even better, I’m going to share it with you readers today.

Pentair PLC (PNR) is a global diversified manufacturing company that manufactures and markets a variety of devices and controls used for the movement, storage, and treatment of water.

This may surprise you, but Pentair has been increasing its dividend to shareholders for the past 38 consecutive years.

Yep, that puts it in the same company as a number of more well-known blue-chip stocks.

Over the last 10 years, the dividend has increased at an annual rate of 9.1%. That’s a pretty generous growth rate, which means the company isn’t handing out pittance just to keep a streak alive.

The stock yields 1.86% here, which may leave a bit to be desired. But the dividend growth rate makes up for a lot of that.

Furthermore, the company maintains a rather low payout ratio of just 35.8%.

So there’s plenty of room for future dividend increases to keep that lengthy track record alive.

Now, you don’t increase dividend payouts to shareholders for 38 consecutive years without doing something right.

Dividends are paid in cash, so the cash flow must be there to maintain those payouts. So let’s take a look and see what kind of growth PNR has been able to generate over the last decade, which will give us an idea of where they’re going so we can value the company.

Revenue increased from $2.278 billion in fiscal year 2004 to $7.480 billion by the end of FY 2013. That means the top line grew at a compound annual growth rate of 14.12%. That’s fairly impressive growth, though the company did acquire a lot of businesses during this period. In addition, a large merger with Tyco Flow was completed in 2012.

S&P Capital IQ predicts EPS will grow at an 8% compound annual rate over the next three years. That factors in the recent merger with Tyco Flow, which should result in improved productivity and cost synergies.

The company’s balance sheet remains responsibly leveraged, even with all the recent mergers. The long-term debt/equity ratio is 0.41. Meanwhile, the interest coverage ratio is 10.47.

Profitability metrics aren’t fantastic, though they have been improving markedly as of late. Net margin averaged 3.37% over the last five years, while return on equity averaged 4.64%.

Solid yield, low payout ratio, lengthy track record of dividend excellence, and a growing business. Other than some lackluster profitability metrics, there isn’t much to dislike here.

Generally speaking, when there’s not much to like with the business, the stock is expensive. Just like the nicest house on the block is generally the most expensive, great stocks are rarely on sale.

However, PNR seems to buck the trend.

The P/E ratio on shares right now is 19.23. That seems a tad high until you realize that it’s traded for a P/E ratio of 23 over the last five years. Hmm, we might have a discount here.

I took it a step further and valued shares using a dividend discount model analysis with a 10% discount rate and an 8% long-term growth rate. That growth rate is a tad above their long-term earnings growth rate, but also below the dividend growth rate. I also factored in the rather aggressive growth rate that’s predicted for the company for the foreseeable future due to the recent merger. So this business is changing and anticipated to grow faster moving forward. The DDM analysis gives me a fair value of $64.80.

My valuation is perhaps a bit conservative, considering the potential moving forward. Let’s find out what analysts are saying about this stock and its valuation.

Morningstar rates PNR as a 4-star stock, with a fair value estimate of $74.00.

Looks like we might have an opportunity on our hands here. Averaging out all three valuation numbers gives us a final figure of $70.90. That means shares are approximately 10% undervalued based on the current $64.41 price one can purchase PNR stock at. Nothing like being able to buy a piece of a high-quality business for less than what it’s really worth. 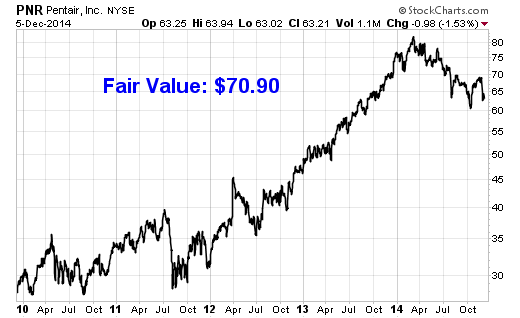 Bottom line: Pentair PLC (PNR) has a fantastic track record of increasing its dividend to shareholders. With a low payout ratio and plenty of growth on the horizon, the odds seem pretty good that the dividend will continue growing at a generous rate for the foreseeable future. Even better, you’re able to purchase shares at what appears to be a possible 10% discount here. The stock market may not offer a lot of sales right now, but PNR seems to be an exception to the rule. You may want to strongly consider this opportunity.