Do you ever look around yourself and wonder at all the amazing infrastructure that surrounds our civilization?

Ever think about how our roads are built? Buildings are erected? Pipes are installed?

Our world as we know it wouldn’t be where it’s at now without the construction necessary to build it.

After all, it’s easy to take our lifestyle as we know it for granted.

It’s easy to drive down the road without thinking about how the road itself was built or how the land the road sits on was cleared in the first place.

And if you’re looking to invest in the continued build-out of infrastructure across the world, as well as the maintenance of it in countries that have already built up, consider one of the finest manufacturers of construction and mining equipment.

You’ve probably heard of this company.

They’ve got the big yellow machines out there, churning earth and moving around humongous structures.

But what you probably aren’t aware of is their rather lengthy dividend growth record or otherwise quality as an investment.

So let’s discuss that today.

The world doesn’t complete major construction projects without the machinery that companies like Caterpillar manufactures. Their machines are in operation in nearly every single country in the world. And their size and scale gives them competitive advantages, as they’re able to mass produce these machines at a higher quality and lower cost than the competition, which has led them to the industry leading position they now enjoy, almost 90 years after the company was founded.

One might assume that Caterpillar is a company that does most of its business in America, since it’s so commonly recognized for its name and machinery here. However, they actually generated 61% of their revenue last fiscal year from operations outside the US. So this is truly an international company not only in its exposure, but also in its sales.

So what kind of profit is involved here with being the largest construction equipment manufacturer on the planet? Let’s find out. Their fiscal year ends December 31.

Revenue climbed from $30.251 billion in FY 2004 to $55.656 billion by the end of FY 2013. That’s a compound annual growth rate of 7.01%. That’s fairly impressive, especially coming from such a large base to begin with. The company certainly stumbled during the Great Recession, and they’ve had a hard time getting back to solid footing since 2011, but this is a highly cyclical business.

Earnings per share increased from $2.88 to $5.75 during this time frame, which is a CAGR of 7.99% Right in line with sales growth, and very solid. The growth was far from secular, as their business is extremely volatile and cyclical. But the overall trend seems to point upward.

S&P Capital IQ predicts EPS will compound at a 7% annual rate over the next three years, which is roughly in line with their 10-year numbers.

So their top line and bottom line growth is pretty acceptable, albeit bumpy. But what about the dividends? The company’s profit bumps around, but do the dividend payouts do the same?

Fortunately, no. Caterpillar actually has an excellent track record of generous and reliable dividend increases.

They’ve increased their quarterly dividend for the past 21 consecutive years, which is really amazing for a manufacturer like they are.

And over the past decade, the dividend has increased at an annual rate of 12.7%.

This is far above what earnings have grown at, but Caterpillar still maintains a respectable and modest payout ratio of just 45.3%. This is due to the fact that CAT started the decade with a much lower payout ratio.

Along with the payout ratio, the stock’s yield has expanded a bit as well – now sitting at 2.64%. This is well above what the broader market offers, and it’s safe and growing. What’s not to like about that?

One might expect a capital-intensive business like Caterpillar to be sitting on a boatload of debt, but you’d actually be wrong. Their balance sheet has improved markedly over the last few years, and the long-term debt/equity ratio is only 0.38. The interest coverage ratio also indicates CAT has no problems with paying their debt interest, as that ratio is 13.59.

Profitability metrics are solid, and in line or better than some of the peers I’ve looked at. Net margin has averaged 6.55% over the last five years, and that includes a particularly one-off year in 2009. Meanwhile, return on equity has averaged 27.68%.

I often mention the wonderful aspects of investing in the biggest and best in any space, and CAT is definitely the biggest in its industry. Their financial metrics also paint a pretty attractive picture. But it’s their economies of scale, brand name, and dealer network that really gives them the type of competitive advantages that are enduring.

Companies have a lot of different products to choose from in this space, as CAT is definitely not the only manufacturer out there. However, one has to consider the costs of not only buying machinery, but also the reliability of that machinery. CAT prides itself on its brand, which has led to the legacy it enjoys today, but also its dealer network, which is there in case something goes awry. The company maintains a dealer network of almost 3,500 locations across 131 countries.

The company seems like a great long-term bet, but risks should be carefully considered. Primarily, the industry it competes in is highly cyclical. Wider economic demand has a great effect on CAT’s top line and bottom line growth. If there’s weak demand for commodities, for instance, the demand for CAT’s mining equipment suffers. Similarly, construction is usually booming when the broader economy is doing well, so Caterpillar is subject to the winds of the greater global economy. In addition, they do face fierce competition in their space, especially in key Asian markets where Komatsu Ltd. (KMTUY) is attempting to maintain a large market share.

Shares are trading hands for a P/E ratio of 17.16 here. That’s well below CAT’s own five-year average ratio of 20.2. It’s also a bit below the broader market.

I valued shares using a dividend discount model analysis with a 10% discount rate and a 7% long-term growth rate. This growth rate is a bit below CAT’s own EPS growth rate over the last decade, and also well below their dividend growth rate. However, CAT will have to slow dividend raises to match EPS growth at some point in the near future. Factoring in a predicted 7% growth rate there leads me to the rate I used in this model. The DDM analysis gives me a fair value of $99.87. 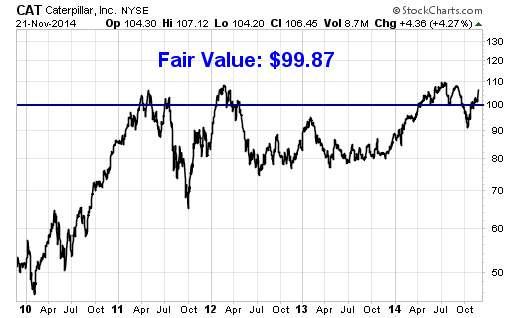 Bottom line: Caterpillar Inc. (CAT) is the world’s leading construction and mining equipment manufacturer, and their brand name, economies of scale, and huge dealer network give them competitive advantages. Furthermore, their 21-year streak of increasing dividends looks set to continue for the foreseeable future, and shares offer an attractive yield here. I’d definitely consider this stock on any pullbacks below fair value to allow for a margin of safety.