Last year, I told you about the “bargain bin” trade setting up in uranium stocks.

Since uranium stocks were badly oversold and uranium demand was set to keep rising, I said the situation presented the opportunity to make enormous gains.

And now, uranium stocks are starting to take off…

And many uranium stocks soared hundreds – and in some cases, thousands – of percent.

But Japan’s Fukushima nuclear power plant disaster in March 2011 helped turn the boom to a bust.

After the disaster, Japan, one of the world’s largest consumers of nuclear power, shut down its fleet of power plants and sold its stockpiled uranium into the market.

Shares of Uranium Participation Corp. – which rise and fall with the price of uranium – fell 50% from their high in 2011 to their recent low in June this year. 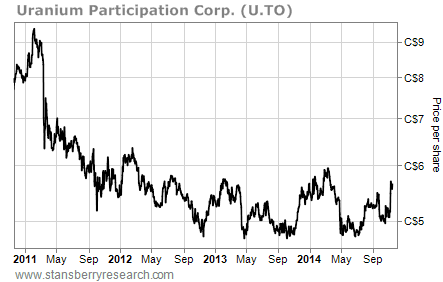 But as my colleague Amber Mason told you earlier this year, when it comes to commodities, the saying is: “the cure for low prices is low prices.” Uranium spot prices are so low that most uranium miners can’t make money. This is causing producers to cut production, stop spending money on new production, and go out of business… tightening supply.

And although sentiment toward the sector remains bad, we still need nuclear power. It generates about 20% of the U.S. electricity supply. And emerging markets like China and India are desperate for sources of low-cost electric power. Uranium is a key component of their future energy plans. These countries will provide a huge source of demand for decades.

Shares of Uranium Participation Corp. are up 17% since their late-June bottom. 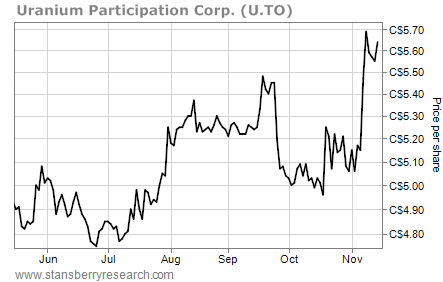 The rise in uranium prices has started to send shares of some uranium stocks higher, as you can see in the table below.

There’s no guarantee this is the start of uranium’s recovery. But eventually, prices HAVE to head higher. And when they do, shares of uranium stocks will soar. I recommend looking into companies like Cameco today.