In today’s essay… an update on the most powerful economic trend in the world. Everything else revolves around this… and yet it’s being almost completely ignored by most investors and the financial media.

I need to begin by giving you a bit of history. Stay with me… without this historical perspective, you can’t understand the magnitude of what’s happening right now in our economy…

It took another 14 years for U.S. oil production to double again.

By 1940, U.S. oilfields finally produced more than 4 million barrels per day on average.

The next double in production took 26 years.

By 1966, U.S. oilfields broke through the 8-million-barrels-per-day barrier.

Nearly every oil expert in the world believed U.S. oil production had peaked in 1970 when U.S. oilfields produced 9.6 million barrels per day.

Today, U.S. crude oil production is around 9 million barrels per day. But at some point in early 2015, U.S. production will surpass the previous high rate of production.

The oil industry’s ability to double its production since 2008 – and then to double it again by 2022 (or so) – will have a monumental effect on the world’s economy… on our standards of living… and of course, on domestic energy prices.

High-quality operators in good shale fields report a cost of production between $15 and $20 per barrel. Keep in mind… this is only the operating cost. It doesn’t include the capital costs (such as buying the land). But it gives you an idea of how much room there is for prices to fall.

Historically, a good rule of thumb was that oil prices would trade at around 10 times natural gas prices. With natural gas between $4 and $6 per thousand cubic feet (MCF), I expect to see oil trading for around $40-$60 per barrel.

(It’s important to note that at those prices, none of the Canadian oil-sands production will be profitable… a point I’ve stressed repeatedly in my criticism of Devon Energy’s large and continuous oil-sand investments.)

My forecast for U.S. crude oil below $60 a barrel is way out of consensus. But even today, few people really understand the magnitude of what has been discovered… and the scope of the energy assets now being exploited in U.S. shale fields.

The more shale drilling the industry does, the larger the estimates of total reserves become. In the Permian Basin in West Texas, for example, early estimates based on a few hundred drilled wells were around 20 billion to 30 billion barrels of recoverable oil.

Today, shale oil producer Pioneer Natural Resource’s (PXD) estimate is 75 billion barrels. That makes the Permian Basin the second-largest oilfield in the world, behind Saudi Arabia’s Ghawar Field. And less than 10 years ago, there was virtually no oil being produced at this field. No one even believed the shale oil could be produced economically.

You might recall that back in 2012, I began to warn folks that crude oil prices couldn’t remain high for long. (At the time, oil was trading around $100 per barrel.) I said that $60 crude was coming.

That number doubled over the next six years, thanks almost entirely to increases in liquid natural gas production in shale fields. By 2010, the U.S. was exporting 6 quadrillion Btu of “high value” energy – mostly propane.

Today, we’re exporting roughly 9 quadrillion Btu of “high value” energy every year. This trend of U.S. energy exports is going to explode over the next decade. Massive investments are being made right now to expand energy export capacity in the U.S. Perceptions about the benefits to U.S. crude oil exports are finally changing, too.

The Brookings Institution think tank estimates that completely lifting the crude oil ban will generate more than $1.8 trillion in economic benefit to the U.S. over a 20-year period. In July, the U.S. exported 400,000 barrels of oil per day… the highest level of exports in 57 years.

Look at the massive strength of the U.S. dollar this year and compare it with the collapse of Russia’s ruble. It’s a sign of things to come. Countries whose economies depend on high prices for energy (and other raw materials) are going to struggle for at least the next decade. 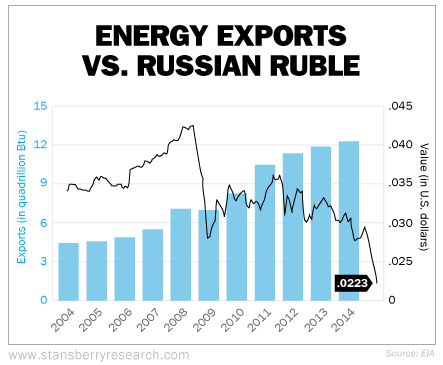 Meanwhile, in the U.S., the incredible efficiency of our energy sector gives us a huge advantage in trade. As more and more of our trading partners abandon cheap energy (like nuclear and coal), our economy’s comparative advantage grows.

For example, Germany – which forms the backbone of the European currency union – already gets 25% of its electricity from renewable sources. German Chancellor Angela Merkel is determined to increase this percentage to 45% by shutting down all nuclear plants by 2022 and making it nearly impossible to mine or consume coal in Germany. The cost of electricity to consumers in Germany is already twice the average price in Japan and three times the cost in America.

Europe will bankrupt itself chasing the fantasy of solar power while America becomes the world’s new Saudi Arabia.

EOG Resources (EOG) is widely considered the highest-quality producer of shale oil in the U.S. Its shares are up 500% over the last 10 years. The Dow Jones Industrial Average is up just 67% over the same period.

Lower crude oil prices will hurt the profit margins of companies like EOG. From time to time, I expect to see big selloffs in shares of these shale-focused production companies. Investors will panic as crude oil prices fall. But I would buy on those dips… because we are still in the early stages of the most important economic trend of our lives.

The U.S. oil and gas industry has decades of growth ahead of it. We are only in the first inning of this trend, which will see America emerge as both the world’s largest producer and the world’s largest exporter. Thus, temporary declines in crude oil prices will be offset by surging production and massive global demand for U.S. energy (in the long run). Make sure you’re invested in this trend.