Today, I’m going to show you one of the most advanced investment skills you could ever master…

But I don’t want to tell you upfront what today’s lesson is about. I want to see if you can figure it out yourself. So don’t skip ahead.

Think of today’s essay as a test. As I always say… there is no such thing as teaching, there is only learning. And there’s a hugely valuable investment lesson – the most valuable secret of all – below…

[ad#Google Adsense 336×280-IA]Let’s start with the big secret about the father of value investing, Ben Graham.

(It’s not that he was a notorious philanderer… Everyone knew that.)

Most people know Graham literally wrote the book (or books) on how to invest: Securities Analysis and The Intelligent Investor.

Likewise, most people know he was a successful investment manager.

That’s all true, of course.

But most people don’t know how Graham got rich. Here’s a big hint: It had nothing to do with his normal method of value investing. It had everything to do with insurance.

After the purchase, the Securities and Exchange Commission (SEC) decided investment partnerships like Graham’s couldn’t own a controlling interest in an insurance company. To get around the rules, Graham distributed the GEICO shares among the various investors in his partnership.

Graham never sold the shares he received from the distribution. By 1972, Graham’s stake in GEICO was worth $400 million. He made more than 400 times his money in 25 years. It wasn’t a lifetime of careful value investing that made Graham a wealthy man… It was an investment in GEICO. Graham made vastly more money in GEICO than he made in all of his other investments combined. About 10 years after buying GEICO, Graham had made so much money that he quit investing altogether and closed his fund.

The success Graham had with GEICO led Warren Buffett – who was Graham’s student at Columbia University – to study the company intensely. In January 1951, Buffett famously visited the company’s headquarters on a Saturday, knocking at the front door until a janitor let him in. After speaking with GEICO executive Lorimer Davidson for four hours, Buffett put 65% of his savings in GEICO’s stock – a stake worth about $10,000.

He wrote up the stock for his clients in a report titled “The Security I Like Best.” The next year, Buffett sold his position for a 50% gain or so. But the lessons Buffett learned from Davidson went on to guide Buffett’s entire investing career. Buffett has said publicly many times that those four hours with Davidson changed his life.

The company lost $126 million in 1975 and looked as though it might go bankrupt. The board brought in a new CEO, Jack Byrne, who radically restructured the company. He fired 4,000 of GEICO’s 7,000 employees, closed down 100 offices, and exited the Massachusetts and New Jersey markets. Byrne raised insurance rates by 40%. Incredibly, in less than a year, GEICO was back in the black. By 1977, GEICO was paying a dividend again.

In May 1976, Buffett met with Byrne. He was impressed. Buffett believed the turnaround at GEICO would be successful. It’s a little ironic, because Buffett is famous for refusing to invest in turnaround situations. He says most turnarounds “don’t.” But in this case, he had been following the company closely for 25 years… and determined it was the best business he had ever found.

He got to know the CEO. He knew he could personally provide the financing required. That’s a much different situation than you or me buying shares of a cheap stock and hoping it goes back up.

Following a dinner with Byrne, Buffett began to buy huge blocks of GEICO shares. The first order was for 500,000 shares at $2.12. He later provided a huge amount of capital to the company – $75 million – through a convertible bond. His cost basis for the stock through this instrument was $1.31 per share.

Buffett’s money helped save GEICO. By 1980, he owned one-third of the company. GEICO represented 31% of Berkshire Hathaway’s equity portfolio at the time. Like his mentor Ben Graham, Buffett was now poised to make tremendous profits. He had allocated a huge portion of his net worth into the best business he had ever found.

By 1994, Berkshire had received $180 million in dividends from GEICO – seven times more money than Buffett spent on buying the stock. Finally, in 1995, Disney bought out ABC/Capital Cities, whose shares Berkshire held. The deal gave Buffett a huge $2 billion profit. Buffett used the cash to buy the remainder of GEICO that Berkshire didn’t own for $2.3 billion. By that point, Buffett had earned 48 times his initial investment in the company.

Today, GEICO’s float (the amount of insurance premiums it carries) is in excess of $16 billion – up from $3 billion in 1995. If GEICO was publicly traded, it would be worth something around $20 billion. Buffett’s initial $25 million investment would now be worth at least $10 billion… 400 times his initial investment.

Now… with that in mind… let me switch gears for a minute. The chart you see below is unusual. I would wager you haven’t seen a chart like this before. It’s designed to show you periods of time when you should have been buying stocks. It does so in a simple way: it measures changes to the S&P 500’s book value as a percentage below its 24-month high. 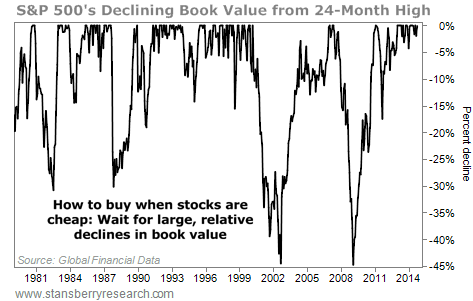 The first was in August 1998 when Russia defaulted. Many high-quality emerging-market stocks were trading for less than four times earnings.

The second was the end of the tech-stock bubble in 2002. My Investment Advisory subscribers can read the October 2002 issue to see how I described conditions at the time. (On the first page, I asked, “Is it the end of the world?”) During this period, many high-quality technology-related businesses were trading for less than the cash on their balance sheets.

The biggest, best-known market correction of my career was in late 2008/2009, when even the world’s highest-quality businesses were trading at decade-low valuations. I recall analyzing shares of jewelry company Tiffany in February 2009 and realizing that the stock was worth $24 per share, assuming you just sold the inventory and used the proceeds to buy back all of the stock and pay off all of the debts.

The stock was trading at $22. Tiffany was trading below liquidation value, implying that you could get the brand name, the operating profits, the future growth, and all of the real estate for free. I doubt you’ll ever see an investment as good as Tiffany’s trading cheaper than that. (As a side note, Tiffany shares trade for around $96 today. The company has paid $6.44 per share in dividends. By simply buying shares in February 2009, you would be up more than 360%.)

Based on these experiences, I’ve come to expect a good opportunity to buy stocks about once every five to seven years… and a great opportunity to come around about once every decade. Lo and behold, when I asked Steve Sjuggerud’s research analyst Brett Eversole to check the historical numbers for me, he found eight different 19%-plus corrections (declines) in the S&P 500 since 1976.

The 2011 correction saw the S&P 500 fall 19.4%, but the ratio only declined 17.5%. This was the least impressive opportunity in our study, but that’s largely because stocks were coming from a super-depressed bottom two years earlier.

So… What do you think the underlying message of today’s essay is? Remember, I was trying to teach you the most advanced skill you can possess as an investor. What’s that skill? What do these stories reinforce?

The most advanced skill you can develop as an investor isn’t knowledge of arcane accounting rules. It’s not developing real expertise in charting. It’s not even becoming an expert in position-sizing and risk management.

The most advanced skill you can develop as an investor is simply the emotional discipline to be incredibly patient.

If you want to succeed in investing, you have to be other-worldly in your ability to wait until you get the rarest of opportunities – a chance to buy the businesses you’ve always wanted at the right price.

Buffett knew all about GEICO. He saw exactly how it enriched his mentor beyond belief. He knew it would certainly enrich him (assuming he bought it at the right price). As a young man, Buffett had foolishly advertised the opportunity and, even more foolishly, he sold the stock rather than simply continuing to buy more.

Think about that the next time you’re going to buy a stock. Is it a great time to be buying stocks? Is it the best time you’ve seen in five or 10 years to make investments in the stock market? Is the stock you’re about to buy really trading at the cheapest price you’ve ever seen? Is it really a chance to make 400 times your money over several decades?

The more patient you become, the better your investments will be. I guarantee it. Patience is Buffett’s greatest virtue. He figured out what businesses he wanted to own when he was in his 20s. Then he waited until he got the opportunity to buy them at prices he knew would make him extremely rich.

There’s no reason you can’t do the same – even if you’re older than 50. Don’t forget: Graham bought GEICO when he was 54. And Buffett’s best investment ever was in Coca-Cola (KO). He started buying the blue-chip soda brand after the 1987 collapse. He was 57 years old when he made that investment.

My advice: Keep a list near your computer or on your desk. When you come across a truly great business – a business that has enriched investors for decades – write down the name. Read its annual reports. Follow its progress. Get to know the business like you know your siblings or your spouse. See how the company responds in good times and bad times. Then… wait for the market to give you a great opportunity to buy the stock.