They say two things in life are guaranteed: death and taxes.

Think about it. Who doesn’t have insurance of some type?

After all, think of all the things you have to insure: your home, car, life, and health.

As such, we shouldn’t be too surprised to see a few major insurance companies show up on David Fish’s Dividend Champions, Contenders, and Challengers list.

This document compiles and tracks more than 550 US-listed stocks that have increased their dividends for at least the last five consecutive years.

And one insurance company has one of the lengthiest dividend growth records in its entire industry.

This is one of the world’s most well-known insurance providers.

And they just so happen to have an emphatic mascot on their side.

Aflac Incorporated (AFL) is a holding company that, through its subsidiaries, provides supplemental health and life insurance policies.

So I’ve discussed my affinity for insurance companies in the past. Prudent underwriting results in solid profitability all by itself, by making sure the premiums collected are larger in aggregate than the claims paid out.

However, another big source of profitability and growth for an insurance company is in the float. The float is basically premium income that’s collected and held until a later date at which time premiums are paid. This interim, however, provides an insurance company time to capitalize on this capital, collecting low-risk returns on clients’ money.

Aflac operates in two markets: Japan and the US. Surprisingly, Aflac actually does the majority of their business in Japan. Their Japan operations accounted for 78% of pretax operating profits in 2013, while the remaining 22% came from US operations.

The company primarily markets its policies through the workplace, as they aggressively promote their insurance as covering gaps in coverage and picking up much of the out-of-pocket costs that most insurance plans charge. Their focus on the supplemental market has allowed them to become the #1 provider by market share of supplemental health and life insurance.

This focus and market share has led to pretty impressive growth. Let’s take a look. Their fiscal year ends December 31.

Revenue grew from $13.281 billion in fiscal year 2004 to $23.939 billion at the end of FY 2013. That’s a compound annual growth rate of 6.77%. That’s actually incredibly high if you look at what a lot of other insurance companies have been able to manage over the last 10 years; however, their revenue growth over the last few years has slowed considerably.

S&P Capital IQ predicts EPS will grow at a 5% compound annual rate over the next three years, citing currency concerns due to the fact that a significant portion of Aflac’s business is generated in the yen, which is weak.

Well, they’ve increased their dividend payout to shareholders for the last 32 consecutive years. That’s one of the best records in the insurance space.

Over the last five years the company has increased the dividend by an annual rate of 8.1%. Meanwhile, the stock yields 2.61% right now, which is attractive both against the broader market and what a lot of other insurance stocks offer.

The payout ratio is low, at just 24.5%. So there’s plenty of room for substantial future dividend increases here. The future looks very bright here for investors expecting and needing plenty of dividend growth.

The company’s balance sheet is conservatively managed, which is appropriate considering their industry. The long-term debt/equity ratio was 0.33 at the end of FY 2013, while the interest coverage ratio is 17.4. These are solid numbers.

Profitability appears to be quite sturdy.

So I mentioned the float earlier.

And this float is in full action here at AFL. They manage a $103.9 billion portfolio, which is extremely sizable. And they manage it fairly conservatively – the majority of it is invested in bonds. This unfortunately can lead to low returns in a low-rate environment, but it also keeps risk fairly low. AFL is more interested in capital preservation than outsized returns.

The company provides coverage to more than 50 million people worldwide. This gives them incredible scale and the high likelihood of recurring and stable revenue for lengthy periods of time. And what’s wonderful about Aflac’s coverage is that they provide cash in the time of need. Clients can make claims against their Aflac policy(ies) for a covered event, and Aflac reimburses the customer for any covered and applicable out-of-pocket costs. So that’s a tangible benefit that clients can actually see.

I’m actually a shareholder in the company, so I’m excited about their future.

There are risks, however, that one should carefully consider. The Affordable Care Act continues to provide a challenging environment here in the US. In addition, there could be lasting health effects due to the Fukushima disaster, and that could cause a spike in claims many years from now. Furthermore, the low-rate environment means Aflac’s investment portfolio returns are subdued right now.

Shares in AFL trade hands for a P/E ratio of 9.36. That’s about half of what the broader market trades at, and also significantly below the stock’s own five-year average of 11. So we could have an opportunity on our hands.

I valued shares using a dividend discount model analysis with a 10% discount rate and a 7% long-term growth rate. That rate is below Aflac’s long-term dividend and EPS growth, but also factors in the predicted growth moving forward. That gives me a fair value of $55.64 on shares. 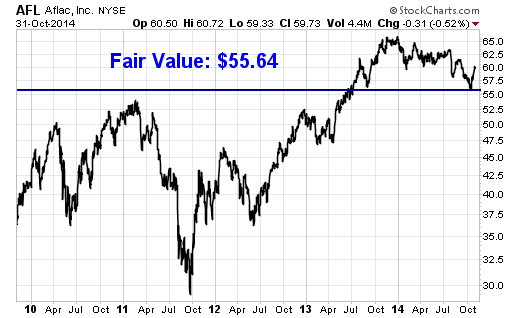 Bottom line: Aflac Incorporated (AFL) has been selling supplemental insurance for over 50 years now, and insures more than 50 million people. This substantial client base has allowed them to leverage a float into an investment portfolio worth over $100 billion. Their 32-year streak of increasing dividends is highly unlikely to come to an end anytime soon, seeing as how the payout ratio is very low and the company is growing at a rather attractive rate. The stock appears roughly fairly valued here, which is probably appropriate for a high-quality company. If you’re looking to ensure your future dividend payments, consider this wonderful insurer.