I absolutely love investing in some of the great industrial titans.

These investments seem like no-brainers to me, and that’s because investing in just one great, diversified industrial company exposes you to almost every facet of the economy. It’s like investing in a fund, rather than a company.

And one particular industrial company out there has its fingers in so many pots it’s difficult to describe them all in one article.

[ad#Google Adsense 336×280-IA]Even better, this company has been increasing its dividend for the last 56 consecutive years.

Yet, 3M Co. (MMM) kept on pumping out increasing dividends to shareholders.

And you gotta like the odds they’ll keep doing it for another 56 years and beyond.

It’s funny that 3M is probably known to most consumers as “that company that makes Post-it notes”, but you can obviously see just by looking at their segments that they’re much more than that.

This is a company that operates across more than 70 countries worldwide and derives approximately 2/3 of its revenue from outside the US while employing more than 88,000 people. It has a market cap of $89 billion. So, yes, we’re talking about more than office supplies.

Just to give you an idea of some of the various products they manufacture and provide, think personal protective equipment, protective duct wraps, structural steel fireproofing, adhesives, abrasives, thermal insulation, filtration products, advanced ceramics, advanced films, and graphics. I could literally fill 10 paragraphs with all the products and solutions they offer, but you get the gist.

By investing in 3M, you’re basically exposing yourself to a broad cross-section of the entire global economy.

Now, it should go without saying that you don’t build a track record of 56 years of consecutive dividend raises to shareholders without doing something right – and that something right is increasing profitability like clockwork. So let’s take a look at their fundamental results over the last decade. Their fiscal year ends December 31.

Earnings per share increased from $3.75 to $6.72 during this period, which is a CAGR of 6.70%. A bit better than revenue growth thanks to a healthy share reduction – the share count was reduced from 797 million to 694 million during this stretch.

S&P Capital IQ predicts EPS will grow at a compound annual rate of 9% over the next three years, citing continued aggressive share repurchasing and the possibility of new product introductions.

But what about that dividend? Well, I already let the secret out that 3M has been increasing its dividend for almost six decades straight. That kind of record means 3M is a “Champion” on David Fish’s illustrious Dividend Champions, Contenders, and Challengers list.

However, these raises add up to a whole lot more than pittance.

Over the last decade, 3M has increased its dividend by annual rate of 6.8%. That approximates earnings growth, which one would more or less expect to continue moving forward. Still, that rate is far in excess of inflation, meaning shareholders’ purchasing power is increasing over time.

The stock currently yields 2.49% right now, which is solid and above the market’s average. Meanwhile, the payout ratio is 48.3%, which means the company is retaining more than half of earnings to continue growing the business. That’s a really healthy mix, in my view.

The company’s balance sheet is solid, and obviously conservatively used.

These are rather impressive numbers, meaning 3M isn’t wasting shareholder cash flow paying off needlessly large amounts of debt. Leverage is great when intelligently used, and moderate use of it would qualify as intelligent in my book.

3M’s profit metrics look sound. Net margin has averaged 14.71% over the last five years, while return on equity has averaged 27.62% over that period. These numbers compare quite well to competitors.

The company is among the leading manufacturers of products for many of the markets it serves, and their size and scale provides them unique competitive advantages. As does their expertise, of which their sizable R&D budget – they spent $1.715 billion on research and development over the course of 2013 – continues to provide them a great source of innovation and product pipeline.

Although their consumer segment is only 14% of revenue, this is where some of their more notable and recognizable brands come to light. Brands like Post-it, Scotch, Scotch-Brite, ScotchBlue, Scotchgard, Filtrete, Command, Ace, Nexcare, and of course 3M.

But their diversification across products and markets is really a key aspect to the business. They have exposure to electronics through touch screen films, data centers through engineered cooling fluid, healthcare through drug delivery solutions, manufacturing through adhesives and abrasives, the home through filtration and cleaning products, the workplace through office supplies, and transportation through reflective tape and raised markers.

There’s a lot to like about 3M; however, one should weigh the risks. Primarily, there is competition to worry about in the industrial space. Furthermore, the global economy might slow down in unforeseen ways. In addition, there is risk that the product pipeline won’t yield new products that can spur continued growth for the company.

Overall, I see 3M’s risk profile as quite low.

3M shares trade hands for a P/E ratio of 19.41 right now, which is at a premium to both their five-year average P/E ratio and the broader market’s valuation as well. So it looks like shares might be a bit on the expensive side, but let’s value them and see.

I valued shares using a dividend discount model analysis with a 10% discount rate and a 6.5% long-term growth rate. That’s more or less in line with 3M’s 10-year growth rate for both earnings and dividends, with a very small margin of safety thrown in. That gives me a fair value of $104.07, which is substantially lower than where shares trade at now. I think 3M is a very high-quality company, but I don’t think the growth profile warrants the valuation at today’s price. A 15% to 20% pullback would start to pique my interest. 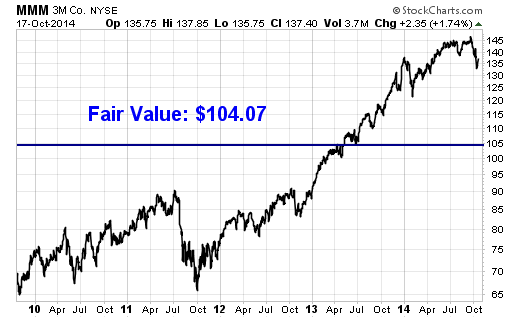 Bottom line: 3M Co. (MMM) is a global industrial powerhouse, diversified across a multitude of products, markets, and geographies. The dividend history is remarkable, and the company appears poised to continue that streak well into the future. However, shares appear to trade at a premium here. Waiting for a pullback seems prudent, although the company’s low-risk profile and impressive history means shares may trade at a premium to the market and its own recent historical valuation for some time.