It’s an industry many consider a “Black Box.”

Money goes in and a lot more money comes out, but few people really know what’s happening on the inside.

I’ve been on the inside… and this industry, I can tell you, is not as complex as people think. And more important for us… it’s one of the most profitable industries on Earth.

Today, investors are just starting to give these stocks their due again after a long time of staying away.

[ad#Google Adsense 336×280-IA]As I’ll explain in a moment, that’s great for investors… and great for the U.S. economy…

If you haven’t figured it out, I’m talking about Wall Street and the finance industry…

Finance is an immensely important part of our economy.

For one, it makes up about 8% of our gross domestic product (GDP).

When it functions right, its immeasurable benefits provide a much bigger boost to our economy.

The true purpose of finance is to help capital and wealth find their most efficient uses. Take one man with some extra savings that he’d like to earn a decent return on and another who has the time and know-how to build a new business. The finance industry pairs those two up so investors earn a return and the business gets built.

That’s a win-win, and it’s how our economy grows.

Of course, the financial industry can get off track. There’s always risk in the system… especially when individuals start eyeing their own bonuses rather than their firms’ long-term interests. That’s what created the conditions that sparked the financial crisis of 2008. But the memory of the multibillion-dollar bailouts Wall Street needed to survive and the bankruptcies of investment banks Lehman Brothers and Bear Stearns are fresh.

The banks won’t let that happen again for a few years… at least until it has been long enough to forget about lessons of the past.

And despite the crash – and the poor sentiment that followed – financial stocks have produced strong, steady returns for about three years now. Take a look: 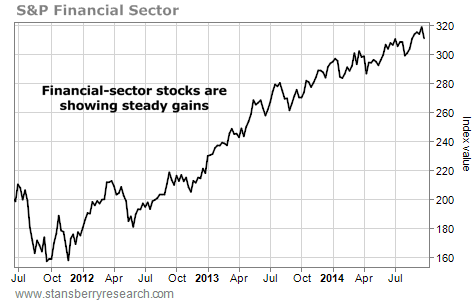 The reason is that banks and other financials have been getting their businesses in order. They’re stronger and more profitable than they’ve been in a long time.

Banks took on too much risk during the housing boom of 2007 and 2008. They nearly went out of business in 2008, but the government bailed them out.

Right now, banks are recapitalizing under new rules that will make them safer. So far, those rules have not proven to be so restrictive as to choke off their businesses.

Banks have also dealt with low interest rates, while consistently earning higher margins. Look at the return on equity for U.S. banks as a whole… 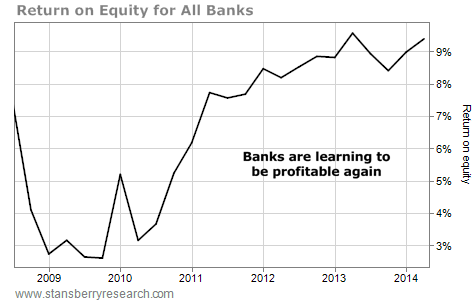 The financial industry is learning to thrive again… even in this tough environment. And although nobody is talking about it, that’s great news for investors… and great news for the health of the U.S. economy.