Interest rates are headed higher in 2015… and most investors see that as a bad thing for the U.S. stock market.

I don’t think it is…

I think we still have plenty of upside potential from here.

For years now, our working script has been that we’re in “the Bernanke Asset Bubble.”

[ad#Google Adsense 336×280-IA]That’s exactly what has happened. Rates have been near zero since 2008… six long years. But we’re now much closer to the end of near-zero rates than the beginning.

The Federal Reserve has achieved its goals… low unemployment and mild inflation. And higher interest rates are likely starting next year.

So what will happen when the Fed finally raises interest rates?

Most investors think the rate hike will kill the stock market boom.

Their basic thought is: “Stocks are going up because of the Fed’s low interest rates and money printing. Once those end, the fun is over.”

Logic says that higher interest rates should hurt stocks. After all, higher rates raise borrowing costs for companies, and they allow you to earn more money on your cash in the bank (which creates competition for stocks).

But history tells a different story… Rising rates are actually a good thing for stocks.

In each of those cycles, the stock market followed roughly the same pattern…

First, the market went up in the months before the interest-rate hike.

Next, it had a short-term correction of roughly 7%.

Then, stocks started going up again – with a significant rally after the correction.

This is the script we need to follow today.

I expect stocks to rally in the months before the rate hike. After the first rate hike, we could see a correction in the 7% range. Then, stocks will surprise everybody, taking off as they enter the ninth inning of this great bull market.

You can see how our script could play out, based on the last three major cycles of rising interest rates, in the chart below: 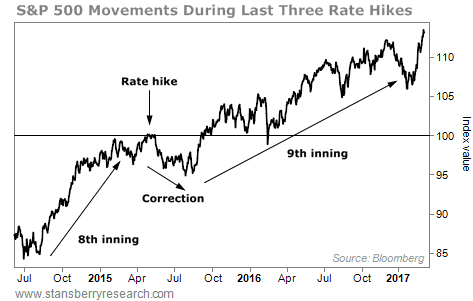 Yes, interest rates will rise in 2015. But that doesn’t mean the end of this bull market in stocks. It actually gives us a great opportunity to make money, based on history.

This is all just a working script, of course. I have no investing crystal ball (and neither does anyone else). But it is the working game plan I’m using today.

My readers have made a lot of money the past few years because we got the big picture right. Looking ahead, the big picture says that rising rates won’t ruin our fun in U.S. stocks.

I urge you to stick with history, stick with the script, and stay invested in stocks right now. We should still have plenty of upside left.