That’s what you’d have today if you bought shares of Molycorp (MCP) near its peak in 2011.

You may remember Molycorp as the poster child of the “rare earth element” craze that swept through the investment world a few years ago. Shares of the small mining company went from $14 to $74 in a matter of months… a gain of more than 425%.

But since hitting a peak in early 2011, Molycorp shares have lost 98% of their value.

Fortunately, there’s a valuable lesson we can learn from Molycorp’s epic collapse.

And in a moment, I’ll share how we can use this lesson to uncover the next great opportunity in the natural resource market.

But first, let’s take a quick look back at what happened with Molycorp…

As you may remember, “Rare earth elements” is the name given to an exotic group of metals, including strange-sounding members like lanthanum and cerium. These little-known metals are crucial components of electric car batteries, wind turbines, and advanced electronics (like your cellphone or tablet).

To this day, China holds a virtual monopoly on the rare-earth industry. And back in 2010, the Chinese had announced a reduction in the amount of rare earths they were willing to ship to other countries. The potential for a supply crunch sent prices for some of these exotic metals soaring thousands of percent. This frenzy pushed shares of Molycorp, one of the handful of non-Chinese rare-earth companies, into the stratosphere.

It didn’t last long, though…

Since the rare-earth mania hit its peak in 2011, investing in Molycorp has produced similar results to lighting your cash on fire. Take a look: 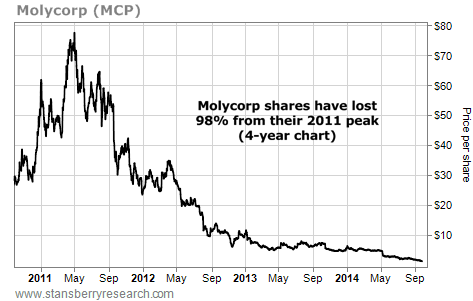 But for investors who did their due diligence, this collapse shouldn’t have come as much of a surprise…

As early as October 2010, I told DailyWealth readers to steer clear of Molycorp. Here’s a quick re-cap of my warning (you can read the full essay here):

The potential for loss at this stock price is huge… I calculated the net present value for Molycorp. This is a rough estimate of the fair value for the stock right now. It takes into account assets, debt, and future cash flows. I also figured out the company’s value by comparables (like valuing your house by looking at the recent deals in your neighborhood).

These two methods produced values between $570 million and $636 million.

Today, Molycorp trades for $2.94 billion. That’s between 4.6 times and 5.1 times larger than its current value.

Remember, this company must spend hundreds of millions of dollars over the next few years. It won’t be cash flow positive for at least three years. It won’t even know if it can get the loans for the construction before next summer. In other words, the downside risk here is enormous… yet the stock is priced for perfection. If bad news comes (and it comes often in mining), shares of Molycorp could fall a long, long way.

As you can see, the valuation of Molycorp was “pie in the sky.” But there’s a bigger-picture lesson we can take away from the mania in rare earths and Molycorp…

Investors should only focus on resource sectors that have recently gone through huge busts. Wait for the market to hit a bottom… and in many cases, wait for the cost of production to outpace market prices for an important commodity. Make sure your downside risk is minimized, and wait for the start of a new uptrend.

My colleague Steve Sjuggerud calls this concept “bad to less bad.” When things are really bad… they don’t have to get good for you to make money… they just have to get “less bad.”

This is the secret to making money in cyclical resource markets… and to avoiding hyped-up story stocks like Molycorp.

The only thing Molycorp and the rare-earths market had going for it in 2010-2011 was an uptrend. As I explained above, it wasn’t cheap… it hadn’t gone through a massive bust… and it certainly wasn’t hated.

In [my next] essay, I’ll share a low-downside resource market that I believe will make investors a lot of money in the coming years. The cost of producing this important resource is now greater than what the market is willing to pay for it… and as I’ll explain, that can’t last. As my friend Rick Rule said at a recent Stansberry Research conference, it’s not a matter of “if” this market will enter “boom” mode… it’s a matter of “when.”