Most people think that you can’t make money once the Fed starts raising interest rates.

[ad#Google Adsense 336×280-IA]While most people thought higher rates would kill U.S. stock prices, the opposite happened, as I explained in this DailyWealth.

Of course, stocks eventually crashed as the Global Financial Crisis hit in 2008. But importantly, stocks did NOT crash when the Fed started raising rates.

The crash happened years later. From 2003 to 2007, smart U.S.-stock investors stayed in stocks when the Fed was raising interest rates, and they reaped big rewards.

However, the biggest gains didn’t come here in the U.S…

They came overseas. More specifically, they came from emerging-market stocks.

Most investors aren’t aware of it, but emerging-market stocks dramatically outperformed U.S. stocks from 2003 to 2007 – a period that included the rising interest rates of 2004 to 2006 – rising by nearly 400% percent: 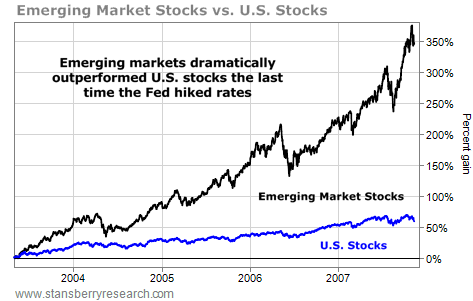 To copy the 2003-2007 trade, you would want to buy emerging markets one year before the Fed raises rates, and hold for one year after they’re done.

That means it’s time to put this trade on now – as the Fed will raise interest rates next year.

You haven’t missed out on it yet, though…

The U.S. has soared over the past few years – more than tripling from the financial-crisis bottom. But emerging markets have gone nowhere. They’ve lagged behind the U.S. so far. The chart below tells the story… 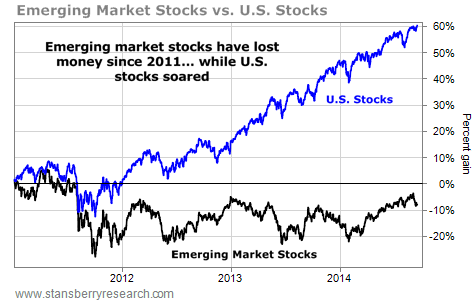 After bottoming in February, emerging markets have finally joined in the global stock market boom.

Shares of the major emerging-markets fund, the iShares MSCI Emerging Markets Fund (EEM), are up 19% since their February bottom. And EEM reached a three-year high earlier this month.

It is time to place this trade…

The Fed has achieved its goals. Unemployment is down and inflation is rising. So the Federal Reserve will raise interest rates next year.

We can’t know exactly when rates will rise. But we can be almost sure it’ll happen sometime next year.

For much more specific emerging-market ideas that have even more upside potential, please see the latest issues of my True Wealth and True Wealth Systems newsletters.