There’s nothing better than a simple, stupid investment idea.

Most folks think you have to reinvent the wheel to beat the market. They think the only way to produce outsized returns is with complex strategies. The kind the average person can’t follow.

This simple idea beats the market by 1.8% a year.

That might not sound like much, but over time, it leads to hundreds of percent in excess returns.

Today’s simple market-beating strategy requires us to rethink what “the market” actually is.

In the U.S., our benchmark for stocks is the S&P 500. This index holds the largest 500 companies that trade in the U.S.

That makes sense. If you want to own the U.S., own the biggest and the best. But there’s a problem with this approach. As my colleague Porter Stansberry points out…

S&P organizes its index by giving the biggest, most expensive stocks more “weight” in the index. Thus, the companies least likely to perform well for investors end up collecting the largest amount of investment capital from index funds.

Porter’s describing “market cap weighting.” It puts more of the index value into the largest companies, and less into the smaller companies.

In the case of the S&P 500, the top 50 companies make up nearly half of the index. That’s a problem… as the largest companies tend to be the most mature, and tend to provide lower returns over the long term.

But history shows there’s an easy way to beat this formula.

The simple change is moving from market cap weighting to equal weighting. In the equal weight S&P 500, each stock is 0.2% (one 500th) of the index, regardless of size.

That might seem like a minor change. But the increase to returns is enormous. Take a look… 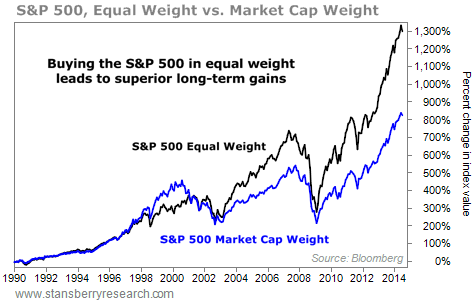 Again, an extra 1.8% a year might not sound like much. But it adds up. And during the “lost decade” of the 2000s, the equal weight S&P 500 doubled while the normal index went nowhere.

The great news for investors is that there’s an easy way to make this trade today. It’s called the Guggenheim S&P 500 Equal Weight Fund (RSP).

While you’ve likely never heard of RSP, it’s a seasoned fund that has been available for over a decade. It does a fantastic job tracking the equal weight S&P 500. And it makes following this idea easy.

Like I said, this is a simple idea. But that’s a good thing. We don’t need to reinvent the wheel to beat the market.

It takes an index everyone knows about, makes a small change, and increases long-term returns. Perfect.

If you’re a long-term investor looking to maximize gains, forget about the S&P 500. Put money to work the smart way. Shares of RSP are the easy way to do it.