If you want to buy something – anything at all – the odds are pretty good that you have to visit a retailer to do it.

Whether it’s online or in a physical store, retailers act as middle men of sorts that bring products and consumers together.

And while this industry is rapidly changing and the ways in which customers shop is always evolving, retailers are likely here to stay for many, many more years.

[ad#Google Adsense 336×280-IA]When I look at which retailers I want to invest in I like to stick to proven winners with lengthy histories of profitability and rising dividend payouts to shareholders.

As such, one might need to look no further than Target Corporation (TGT).

Their corporate history goes way back to 1902.

Things change a lot in the retailing world, but over 100 years of operation says a lot about this company’s staying power.

Whereas there are many retailers one can choose to invest in, the pool of profitable retailers with histories that go back more than a century are quite limited.

Target Corporation (TGT) is a retailer that sells a broad array of merchandise and food across more than 1,800 stores throughout the US and Canada.

They operate in two segments: US, and Canada.

Retailing is typically fraught with low margins. Big revenue, but low profitability. TGT bucks this trend for the most part, but has faced difficulties over the last year or so with a massive data breach that impacted the company and its customers at the end of 2013. In addition, their expansion into Canada has not been very successful thus far.

The data breach impacted up to 40 million customers’ credit/debit card information, as well as up to 70 million customers’ personal data. The access point used by criminals has since been closed and Target is well on their way to rectifying this issue through a number of directives.

Meanwhile, Target moved swiftly into Canada by opening 124 stores in the country during the year of 2013. So far, Canadian customers have not strongly responded to shopping in these new stores due to merchandising and pricing issues. But Target has plenty of experience in merchandising, as previously mentioned. If any company can solve how to get the right merchandise at the right price in the hands of the right customers it’s a company that’s been doing it for more than a century.

TGT has actually posted pretty impressive growth over the last decade, but these numbers have been negatively skewed by recent events as described above. Their fiscal year ends January 31.

Revenue increased from $46.839 billion in FY 2005 to $72.596 billion in FY 2014. That’s a compound annual growth rate of 4.99%, which actually isn’t bad considering that retail typically isn’t full of explosive growth. And TGT has largely done this with exposure only to the US market.

Earnings per share, meanwhile, grew from $2.07 to $3.07 during this time frame. That’s good for a CAGR of 4.48%. This number doesn’t quite accurately paint the company’s growth picture because earnings have been substantially impaired over the last year due to the expensive Canadian expansion and data breach. S&P Capital IQ predicts EPS to grow at a compounded annual rate of 8% over the next three years, which would actually be more in line with their historical norm.

But what about the dividend? Profitability is wonderful, but I want to see the benefits firsthand. And the best way I know possible is to collect a dividend.

Not only are they featured, but they’re listed as a “Champion” due to the fact that they’ve raised their dividend for the last 47 consecutive years. That’s extremely impressive.

Over the last decade alone, TGT has raised the dividend by an annual rate of 19.8%. You don’t find many companies with that kind of sustainable rate over an entire decade.

And the stock is yielding a fantastic 3.45% right now. That’s far above what the broader market offers, and far above what other major retailer’s stock offer. That’s near an all-time high yield for this stock, which provides for a significant opportunity if you believe Target is here to stay.

The only negative aspect of the dividend right now is the fact that the payout ratio remains elevated, at 74.6%. That’s quite a bit higher than what the company typically sports due to the aforementioned impairment of earnings. However, even with the impairment, which is likely temporary, the dividend is comfortably covered.

The balance sheet is a bit more leveraged than I’d like to see.

The long-term debt/equity ratio stood at 0.78 at the end of last fiscal year.

So they remain fairly leveraged. But I hope to see the balance sheet cleaned up a bit after they’ve moved past the data breach and Canadian expansion issues.

Margins are thin, as one would expect. Net margin has averaged 3.83% over the last five years. Return on equity, meanwhile, has averaged 16.7% over the same time period. Retailing is typically a low-margin industry, so I’m not really surprised to see such numbers.

This is a moment of truth for Target. They have largely underwhelmed over the last year, and have faced a number of issues all at once. Shoppers’ confidence has taken a hit, and with it Target’s earnings. The Canadian expansion hasn’t gone the way management had planned. Furthermore, retailing in general is more competitive than ever as traditional brick-and-mortar retailers face an onslaught from online competitors, like Amazon.com, Inc. (AMZN).

But if any company is equipped to deal with these issues, it’s one with over a century of experience who has also spent nearly half that time giving increasing dividend payouts to shareholders. You don’t increase dividends for almost 50 years in a row if you aren’t running a successful and growing business. It just doesn’t happen.

And they’ve been making moves to combat the problems.

At the end of July, the company announced the hiring of Brian Cornell as the new CEO and chairman, the first CEO ever hired from outside the company. I think this shows that Target is taking a serious approach to fixing past mistakes and is welcoming a fresh perspective for the brand. Mr. Cornell has plenty of experience in retail, holding a number of management positions with other retail enterprises, including Sam’s Club – a division of Wal-Mart Stores, Inc. (WMT).

They’ve also moved to enable their REDcards to have chip-and-PIN technology by early 2015, which should reduce the chances of a data breach occurring again. In addition, they’ve also hired Brad Maiorino as chief information security officer, a position he held at General Electric Company (GE).

Target has also moved to increase shopper’s confidence and awareness in an effort to improve goodwill. They’re investing $5 million in a coalition as part of a multi-year campaign to educate shoppers on scams. They also offered free credit monitoring to guests after the breach. And the company has made it publicly known that no guests will have any liability for any unauthorized purchases.

Meanwhile, the company recently posted 30% growth in digital sales with their second quarter results, approximately double the industry’s growth rate. So they are spearheading additional efforts to compete online.

In addition, Canadian segment sales increased 63.1% as of the most recent quarter. So sales are moving in the right direction.

It’s said that the best time to buy a great company is when they’re facing issues. And Target is definitely experiencing some misfires right now. But I believe TGT will be around for many years to come, and remain a long-term shareholder here.

Shares in TGT are trading for a price-to-earnings ratio of 21.63, which is deceivingly high due to earnings impairment. The recent second quarter results included an accrual for what the company believes will be the vast majority of actual and potential claims as a result of the data breach. Earnings should start to normalize from here. This P/E ratio compares to their own five-year average ratio of 14.9.

I valued shares using a dividend discount model analysis with a 10% discount rate and a 7% long-term growth rate. This growth rate may appear a bit aggressive considering their 10-year EPS growth, but I believe earnings will normalize in the next year or so. Furthermore, the dividend has grown at a much faster clip than 7% over the last 10 years. The DDM analysis gives me a fair value on shares of $74.19. I think there is a decent margin of safety on this stock here, as even a lower growth rate means shares still appear fairly attractive right now. 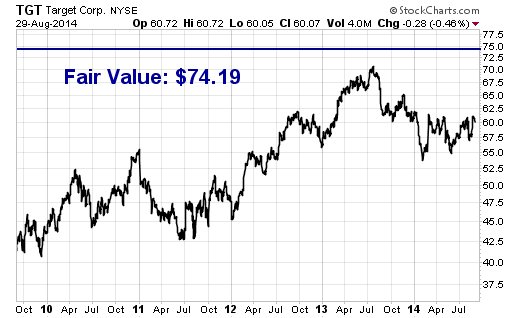 Bottom line: Target Corporation (TGT) is an entrenched retailer that’s been around for more than a century, and has raised its dividend to shareholders for almost 50 consecutive years. Their recent problems appear to be mostly past them, their online sales are growing, and new, outside management brings a fresh perspective. I think this company remains a target (pun intended) for investors seeking an attractively valued stock that offers a fairly substantial yield.