When’s the last time you flew in an airplane? Got inside an elevator? Found yourself in a building with air conditioning?

There are many companies out there that produce the products that form the backbone of our economy.

And a lot of times you find that these companies aren’t everyday names. But that doesn’t make them any less fantastic investments.

There are a lot of businesses out there quietly producing products and/or providing services that people and other businesses all around the world require.

And many of them exhibit characteristics that are really high in quality, making them great long-term wealth builders.

While you may not know who makes the engine running the airplane you’re on, the elevator you ride, or the air conditioning system cooling the air around you, that doesn’t make these products any less necessary, important, or lucrative.

Take a company like United Technologies Corporation (UTX) for instance.

This is a fantastic industrial conglomerate that produces some of the products mentioned above, and has been doing so since they were founded in 1934.

And they’ve been paying increasing dividends for two decades.

A record like that doesn’t materialize if a company isn’t regularly increasing profitability.

And profitability doesn’t increase if a company isn’t producing the products and/or providing the services that others require.

United Technologies Corporation (UTX) provides products and services to the building and aerospace industries on a worldwide scale.

So check this out.

These may not be products that you think of on an everyday basis, but these products do indeed make the world go round.

Imagine a skyscraper without an elevator to move throughout the building efficiently. Imagine an office building without an HVAC system to keep it cool in the summer. Imagine the F-35 Joint Strike Fighter without an engine.

UTX not only provides key industrial products and services, but does so in such a way that they’re a leader in almost every area they operate. And they’ve been doing this pretty consistently going as far back as I can see.

Let’s take a look at their 10-year history. I tend to look at a company’s growth going back the last decade to see how they’ve performed. Past performance is certainly no guarantee of future success, but ten years tends to smooth out a business cycle, which gives a prudent investor a good idea of how the business is doing. Their fiscal year ends December 31.

Revenue has increased from $37.445 billion in FY 2004 to $62.626 billion in FY 2013. That’s a compound annual growth rate of 5.88%. Pretty solid growth here. Some of the growth is cyclic, which is to be expected. But they seem to do quite well through the ups and downs of the broader economy, and recovered well after the Great Recession.

Earnings per share grew from $2.76 to $6.21 over this same period. That’s a CAGR of 9.43%. Quite impressive growth for what some might consider a boring company that few have heard of. Furthermore, S&P Capital IQ predicts EPS to compound at an 11% rate over the next three years. Nice.

But what about the dividend?

Good news. UTX takes its relationship with shareholders seriously, and has paid shareholders increasing dividends for 20 consecutive years. As such, they’re featured as a “Contender” on David Fish’s Dividend Champions, Contenders, and Challengers list, which tracks 550 stocks with at least five consecutive years of dividend raises.

And they haven’t just paid a little more here and there.

These raises have been meaningful.

Over the last decade, UTX has raised the dividend by an average annual rate of 14.5%.

Meanwhile, the payout ratio is quite low. At just 37.6%, there is still plenty of room for future dividend increases. So that bodes well for current shareholders.

The yield, at just 2.16%, leaves a bit to be desired, but one should consider it a positive characteristic that the business is run fairly conservatively. And the growth in the dividend should make up for the low initial yield.

Speaking of conservative, the balance sheet continues that theme. The long-term debt/equity ratio stood at 0.62 at the end of FY 2013, which is a fairly low number for an industrial conglomerate that manufactures large products and tends to be asset-heavy. Furthermore, their relatively strong interest coverage ratio of 9.0 indicates that the balance sheet is healthy and the business can easily cover interest expenses.

This is a company I’d love to own equity in, but haven’t yet had the chance to invest in yet. But I do hope to add it to my Freedom Fund at some point.

One great aspect of UTX is their diversification, both in terms of industry and geography.

I love to invest in companies that provide products and/or services that are ubiquitous. And it’s hard to ignore a company that is simultaneously the world’s most prolific manufacturer of elevators and escalators, as well as commercial and military helicopters.

The scale necessary to produce products like elevators, jet engines, and HVAC systems is pretty large, which creates a competitive advantage all by itself. In addition, once you garner key long-term contracts with certain products it’s likely that those contracts will continue if the supplying company continues to live up to expectations.

After all, you don’t just start switching out elevators or jet engines when the infrastructure is based around those products. And UTX’s broad scope and diversification across industries, products, customers, and geographies means they’re somewhat insulated from significant business downturns.

While this is a great business with competitive advantages and a longstanding track record of success, there are risks to consider. You have to consider that their earnings and revenue can be cyclic in nature. Demand for some of their products can vary based on life cycles. In addition, there is also competition to worry about, specifically in some of the aerospace and security businesses.

I valued shares using a dividend discount model analysis with a 10% discount rate and a 8% long-term growth rate. I think that rate builds in a margin of safety, considering it’s well below UTX’s growth rate in the dividend and earnings over the last decade. It’s also below what the company should post for growth over the foreseeable future. The DDM analysis means fair value is right about $127.44. 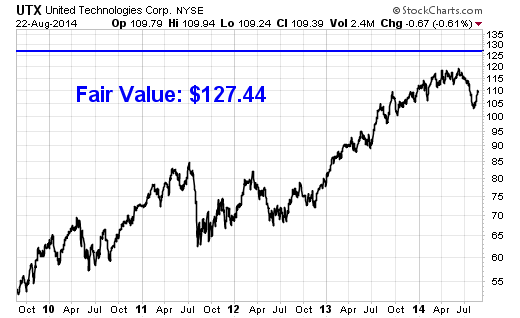 Bottom line: United Technologies Corporation (UTX) is an industrial conglomerate that is a leader in many of the segments it competes in. It’s the world’s largest elevator and escalator manufacturer, and the world’s leading commercial and military helicopter manufacturer. It’s been paying a dividend for 77 years straight, and raising it for the last 20. Those kind of results speak for themselves. Its wide diversification across industries, customers, products, and geographies means UTX is well-positioned to continue delivering profitability for shareholders, along with increasing dividends.