Companies that have recently declared their first-ever dividend may be one of the best investing barometers in existence.

At least that’s how Peter Hodson, a former hedge fund guru at Sprott Asset Management, feels. In fact, after more than 25 years in the investment management industry, he swears by it.

There’s some logic to all this.

A company doesn’t have to pay dividends, it chooses to.

[ad#Google Adsense 336×280-IA]And if a company that has never made payments before suddenly decides to start, then it’s probably a profitable company whose underlying business fundamentals are strengthening.

No sensible management team will commit to millions in recurring obligations if the prospect of future cash generation looks iffy.

That’s true with any dividend increase, but particularly the first one.

Anybody can make their 50th or 60th monthly mortgage payment without much thought.

It’s buying the house and committing to the first monthly payment that takes some number-crunching and forecasting.

In much the same way, a company doesn’t enter into a new dividend without a confident outlook.

Now, there are some skeptics who claim that a company only decides to start paying dividends when its growth options have been exhausted. I disagree.

More likely, it signals a maturing company that is generating enough internal cash to fund its growth initiatives and still have something left over for stockholders. It could also indicate the business has spent heavily in recent years and is finally reaping the rewards.

Consider Apple (Nasdaq: AAPL), which first approved a $2.65 per share quarterly distribution in March 2012. It wasn’t exactly an ominous sign. The company shipped 33.8 million iPhones during the fourth quarter of 2013, up from 26.9 million a year earlier, and introduced several new product lines.

With all this in mind, here are several companies that have recently authorized new regular dividends. Keep in mind, prudence dictates that the initial payout rate be set at a conservative level — and then adjusted upward from there as conditions allow.

So most of these initial yields won’t blow you away. But these are just the first baby steps. I expect to see meaningful distribution growth in the near future. In other words, several of these modest payers could be the high-yielders of tomorrow. 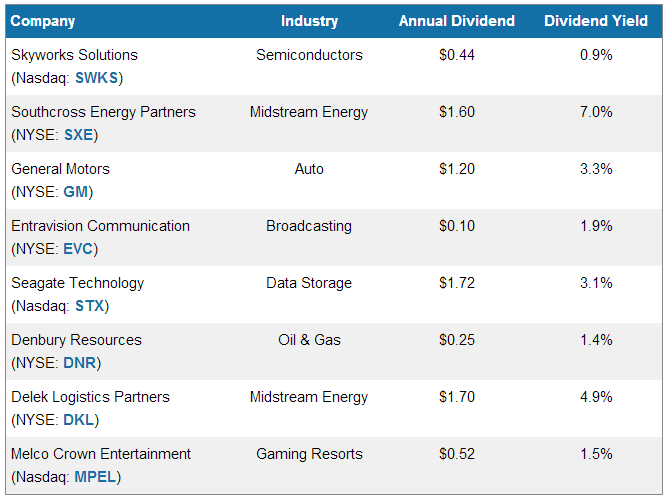 Each of these companies is paying dividends for the first time, except for General Motors, which is reinstating payments after a 6-year hiatus (a similarly bullish signal).

With wealthy Chinese gamblers pouring in, Melco Crown’s profits more than doubled last quarter to $223 million — and the company has two new high-end properties under development. For the first time, management is returning some of the winnings (30% of net income) to stockholders.

The highflying stock has pulled back recently to a more affordable level. The yield may not be overwhelming, but it could over time be much higher. With 100% earnings growth (and the company paying 30% of profits), today’s 1.5% yield could be 4% in 12 months. In the meantime, this stock could easily gain 50% or more. This is a stock that I’m strongly considering adding to the more aggressive portion of my personal portfolio.