Newsletter readers hear it every week…

“The U.S. economy isn’t recovering… the consumer is dead… nobody can get a good job.”

You hear this gloomy stuff from folks in the media… and you hear it from a lot of market “gurus” on television.

If the economy is as bad as these guys say it is, we should just buy guns and canned food and move to a compound in Montana. But rest easy… the facts say the economy is doing a whole lot better than the pessimists would have you believe…

[ad#Google Adsense 336×280-IA]The U.S. economy is driven by goods and services – 70% of the economy comes from these sectors.

A good way to track the health of these flows is with retail spending figures.

These figures show us if the American consumer is spending or not.

The chart below displays retail spending figures since 1992.

As you can see, the consumer is at an all-time high in his buying.

To the people who say “the consumer is tapped out” – give me a break. 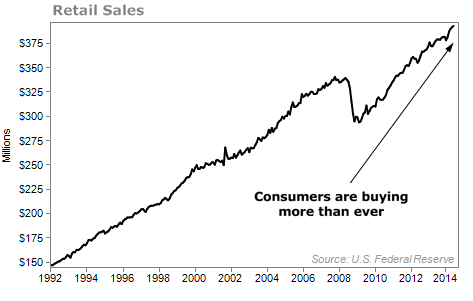 We’re also starting to see better signs of employment, which means potentially more spending and consumption of more goods and services. I like to track employment with “nonfarm” employees. This is a common way of tracking employment. You can see from the chart below that this number dipped during the recession… but recently reached an all-time high. 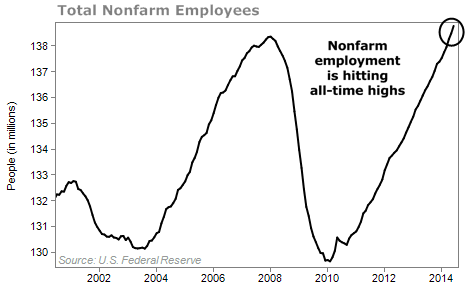 Banks are issuing more loans as well. There is growing demand from businesses looking to start up or expand. As you can see in the following chart, total commercial loans and leases are climbing faster. The previous high of $7.3 trillion was set in October 2008, a level we surpassed about a year ago. 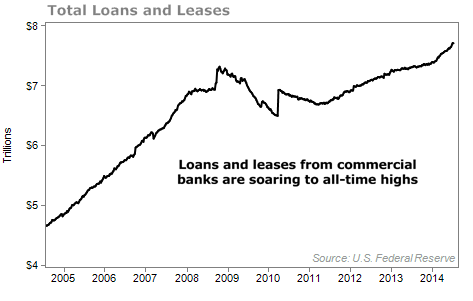 As you can see, the economy is doing much better than the pessimists would have you believe. Retail spending, employment, and loan demand are growing.

Municipal bonds are loans made to state and municipal governments. To encourage folks to loan money to governments, interest received from “munis” is exempt from federal income tax and, in many cases, state and local income taxes. This makes them a great way to earn investment income… and keep it all for yourself.

Take one of my favorite muni-bond funds, for instance… the Invesco Value Municipal Income Trust (IIM).

I began recommending IIM in my Retirement Millionaire newsletter back in March 2011. Since then, the share price has remained relatively stable – it’s up about 9% in three years.

But each and every month – no matter what stocks have done – IIM has paid out a tax-free yield of more than $0.07 per share. That works out to a yearly income of about $0.90 per share… or a little over 6% at today’s prices.

When you consider the tax benefits, it gets even better… You’d have to make more than 9.5% on a normal investment to match IIM’s post-tax income. This fund is still a terrific buy.

Don’t let pessimists scare you into thinking the economy is collapsing. The facts say otherwise. And a good way to invest in this environment is through tax-free municipal bonds.

Here’s to our health, wealth, and a great retirement

Sponsored Link: Tax-free municipal bonds are a terrific way to earn substantial safe income today. But right now, I’m also recommending a little-known way to earn even larger streams of income. I’ve used this method to generate average annualized gains of 51.2% for my readers over the past few years (and more than 98% of my recommendations have been profitable). We recently set up a special tutorial video to show you exactly how simple it is to use this strategy. You can watch it for free right here.