In his 2012 letter to shareholders, Warren Buffett offered a persuasive (some might say impregnable) argument for Berkshire Hathaway (NYSE: BRK.a) foregoing dividends.

Buffett posits that Berkshire investors can manufacture their own dividends through a “sell-off” strategy.

[ad#Google Adsense 336×280-IA]By systematically selling a set percentage of their shares, they can receive annual cash flow without everyone being burdened by an official dividend policy.

Buffett manufactures his own example of a small $2 million company where you and he are equal partners.

The company earns 12% on its capital; any outside buyer is willing to pay 125% of the company’s net worth.

By systematically selling 3.2% of your investment every year, you can realize more income and higher net worth compared to a policy that pays a third of the company’s annual income as dividends.

In the tenth year, an investor selling 3.2% of his holdings collects $82,775 in cash. The investor receiving a third of annual earnings as dividends receives $79,960. What’s more, the sell-off strategy leaves the investor with a higher net worth. The market value of his holdings is $2.8 million compared to $2.7 million under the dividend-payout strategy. (This is due to a higher reinvestment rate that’s offset by a lower ownership percentage.)

But Buffett’s sell-off strategy has a glaring shortcoming: In time, you’ll no longer be an owner. Indeed, after 10 years, your ownership position has already been whittled down to 36% from 50%.

I offer an alternative predicated on the one-third dividend policy: In my scenario, the one-third earnings paid out is replaced by borrowing the difference. (Actually, it’s slightly less because I deduct interest expense from the full proceeds).

Under my scenario, you receive $40,000 in dividends the first year. By the end of the tenth year, you receive $106,940 in annual dividends. What’s more, your net worth – equity value less outstanding debt – is $2.85 million – higher than the two aforementioned alternatives.

Like Buffett’s strategy, mine, too, is imperfect. In time, financial risk rises due to a rising debt load. Lenders will eventually demand a higher interest rate, which will reduce the amount of money reinvested annually.

Both Buffett and I present a hypothetical. And to be honest, if Buffett actually were running a $2 million company, by all means reinvest every penny… and then some.

I’ll buttress my argument with a real world example of an investment firm, Icahn Enterprises (NYSE: IEP), that is a prolific dividend (actually “distribution”) payer and Berkshire Hathaway. Icahn has been the better wealth-generating investment over the past decade. This, despite distributing nearly all its earnings to investors. 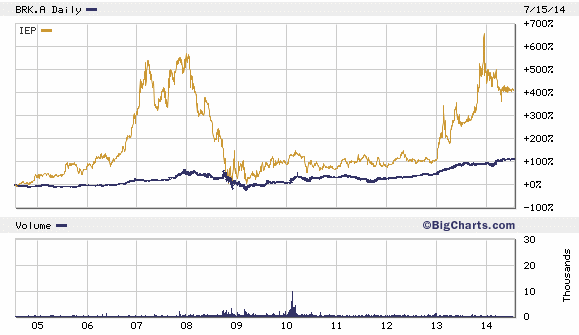 As you can readily see from the chart above, investors haven’t penalized Icahn for distributing earnings. Neither have they penalized him for continually tapping debt and equity markets when investment opportunities arise. (As a partnership, Icahn Enterprises retains little of its earnings, thus it must tap external markets for additional capital.)

That’s worth remembering. Given Buffett’s reputation, he will always have access to cheap capital. Therefore, there is no reason to retain $48 billion in cash in the event a $30 billion elephant materializes. Outside investors will fall over themselves to provide the ammunition for the hunt.

To grow Berkshire and to pay a dividend aren’t mutually exclusive activities.