The spike in interest rates last week was just the beginning of a major rally.

Two weeks ago, we said interest rates were setting up for a surprise move.They had been falling all year.And most analysts were expecting rates to continue even lower, or at least remain at their depressed levels.But we said rates looked poised to rally. Last week, they started a new uptrend.

And that’s bad news for bonds… 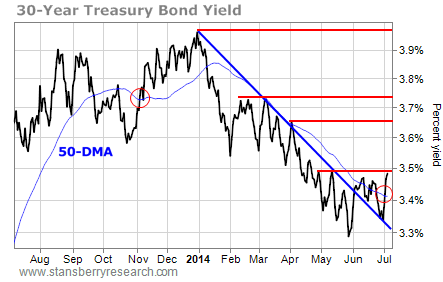 As you can see, the 30-year Treasury yield broke above the blue down-trending resistance line in early June. It tested that line as support two weeks ago. Support held, and rates blasted higher last week.

First, last week’s action marks the first “higher low” on the chart since rates started falling at the beginning of the year.

For the past six months, every time interest rates tried to rally, the bounce would fail and rates would drop down to a lower level.

That didn’t happen this time. The 30-year Treasury yield held above its May low and formed a higher low right on the support line.

The 30-year Treasury yield is also now above its 50-day moving average (DMA). Most technical analysts view the 50-DMA as the line in the sand separating intermediate-term uptrends from intermediate-term downtrends.

Yes, the 30-year Treasury yield did try to break above its 50-DMA two times in June. Each of those attempts failed. But both of those moves were just barely above the 50-DMA. We can argue they were within the “wiggle room” area of resistance. Last week, there was a clear breakout above the 50-DMA. The trend is now higher.

The 30-year Treasury yield is now bumping into resistance near 3.5%. If it can break above that level, the next stop is 3.65%.

That may not seem like much of a move. It only brings interest rates back up to where they were at the start of April. But a spike to 3.65% would be an unpleasant surprise for bond investors.