And if you use these ideas in the right way… you can produce hundreds-of-percent profits routinely and safely. But… if you’re careless, lazy, or greedy with these ideas… they will destroy your savings.

Regarding options, let me start with some important parameters…

[ad#Google Adsense 336×280-IA]You should only use these techniques on high-quality companies (companies with either great brands, great assets, or both).

And you should only use these ideas when you are 100% certain the value of the company far exceeds its current quoted price.

If you couldn’t testify before Congress – with enough supporting evidence – that a fair price for the business is at least 50% more than the quoted price, don’t even think about using these techniques.

Likewise… never… ever… put more than 10% of your capital at risk in any of these trades. You can make a lot of money with these ideas, but they will produce volatile results. You cannot handle this kind of volatility unless you’re using the proper position sizes. Don’t have enough capital? Don’t do the trade.

(Please… read the last paragraph again before you continue – especially the last sentence: If you can’t accurately value the business, if you aren’t certain of what it’s worth, or if you don’t have enough capital to maintain the position at less than 10% of your portfolio – don’t do the trade.)

My strategies involve using options. That statement ends the conversation for most of my readers. And that’s really fine. You can be successful as an investor if you never, ever trade an option. On the other hand, if you want to make really large gains, you must use options. The key to success is never to pay for them. I think you’ll agree that there’s nothing wrong with taking a speculative position – like a call option – if you don’t pay for it.

Let me show you exactly what I mean, using a real recommendation that we published recently in my Stansberry Alpha service. The right way to use options is to use them in a way that greatly reduces your risk, greatly enhances your leverage, and can provide enormous returns on the capital you invest into the trade.

To start… you must find a security that features world-class assets and is deeply undervalued. Even as late as the end of 2012, that wasn’t hard to do in the U.S. market.

For example, we’d been following the shares of MGM since mid-2008. The company, as you surely know, owns most of the major hotels on the Las Vegas strip. In the mid-2000s, it decided to build the most expensive, privately financed residential development in the history of the United States – the $9 billion City Center. The project increased the number of MGM-owned hotel rooms in Las Vegas by about 50%. Some were even concerned that the Las Vegas airport didn’t have the capacity to bring in enough people to fill these hotels and condos.

It was far too much new capacity at exactly the wrong time. We thought it was possible the company would go bankrupt. But we also knew if the company got additional capital, the stock would soar…

That’s what happened in 2009: Wealthy oil-backed investors from the Middle East bought half of City Center. Then, during the years that followed, MGM restructured its debts, lowered interest costs, and made bankruptcy unlikely.

At that point, we needed to see one last sign before investing – a rebound in hotel rates, occupancy, and sustained revenue growth.

We recommended the stock in the July 2012 issue of my Investment Advisory. It was one of the best investment opportunities I had seen in my career. It was the kind of opportunity that can result in big gains in a short amount of time. With the company’s balance sheet back on solid footing, I didn’t believe there was any material risk in owning the stock. So… how could we turn this good of an opportunity into a killing?

In the December 2012 Stansberry Alpha (our second issue), we recommended selling a put option on the stock with a strike price of $10 that expired in January 2014. A put option is nothing more than a promise to buy 100 shares of stock at a fixed price ($10, in this case) for a certain period of time (until January 2014).

The main advantage of selling a put – of merely promising to buy the stock instead of actually buying it – is leverage. To allow you to sell this option, brokers ask for a deposit that assures you can meet your potential obligation. (The amount of leverage you can get depends on your broker, but the legal minimum is only 20%.) With a strike price of $10, investors only had to put up $2 per share. And this is hard to believe, but it’s true… other investors were willing to pay us $1.36 in exchange for this promise to buy the stock.

In our view, selling a put is less risky than buying a stock. It requires less capital (in deposit). And assuming you pick a strike price that’s below the market, your effective “buy-in price” will be lower than the price of the stock at the time of your trade.

In this case, instead of buying MGM shares at $11, we were promising to buy at an effective price of $8.64. We calculate our effective “long” price by simply subtracting the fee we got in exchange for selling the put from the strike price ($10 – $1.36 = $8.64). I hope you can understand that buying a stock at $8.64 a share is less risky than buying the same stock at $11 a share. Thus, selling puts allows us to take less risk, but in a leveraged way.

The main problem with merely selling puts is that it’s too safe. Yes, we’re earning $1.36, while only putting up $2. That’s an instant return of 68% – but we’re only earning that return on a sliver of our capital. If the stock takes off like we expect, we’re giving up a lot of potential upside. We don’t have enough capital in the trade and we don’t have an unlimited upside position.

To capture more of that upside, we can spend a portion of the cash we received for selling a put (called the “premium”) to purchase a call option. A call option is the opposite of a put option. It gives us the right (but not the obligation) to sell 100 shares of stock at a fixed price for a fixed period of time.

As you can see, it costs almost nothing. And it requires zero deposit. Considering that even after buying this call option, we’re still getting $0.79 in net premium for our promise to buy MGM (39.5% return on invested capital), I’d consider that a nearly free option.

I get that it’s not actually free… but the point is… I don’t believe you should ever buy an option unless you’ve found a way to finance it. And when I can earn an immediate return of nearly 40% on the capital I’ve tied up in this trade and get a call option… then the call is close enough to free for me. 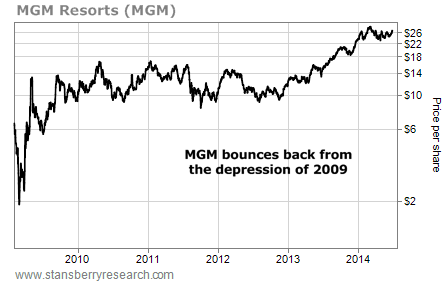 After our recommendation… MGM’s stock did well. After about six months, it was up more than 50%. In June 2013, we decided to take some of our profits off the table, mostly because we grew concerned about the U.S. corporate bond market (which was crashing). In hindsight, we sold much too soon. But even so, let’s look at what happened.

First, we never had to put any additional capital into this trade. The stock never traded for less than our $10 strike price. Thus, we never got a “margin call.” To close the position, we had to buy back the put we’d sold. The price of the put had fallen to $0.22, leaving us with a net premium of $0.57 per share (after you account for the cost of the call option we bought). That’s a reasonable 28.5% gain in about six months.

In real dollar terms, let me show you how this might have worked in a real portfolio. Let’s assume you have a $100,000 portfolio. Putting $2,000 into this trade (on margin) would have allowed you to sell 10 put contracts on MGM at our recommended $10 strike. (Remember, each contract covers 100 shares.) That’s only 2% of your entire portfolio.

But this trade is using 20% margin, which means your total potential margin requirement is $10,000. That’s 10% of your portfolio. You’re within our recommended risk boundaries. If your portfolio is smaller, then you simply sell fewer put contracts. (With a $50,000 portfolio, for example, you would sell five contracts as a maximum position size.)

To sell the 10 contracts, you’d give your broker $2,000 in cash. He’d immediately hand back to you $1,360 in put premium, from which he’d take another $570 to purchase the $15 calls. You’d start out the trade up $790 – almost $800 in the black. That offers you a considerable “margin of safety” – an instant return of 40% on the capital you’ve invested in the trade. Realize, like in a real estate deal, if you are forced to meet a margin call, your return will decrease. That’s why it’s critical that you limit your trading only to deals where you can have a tremendous amount of certainty in the underlying value.