The entire world is focused on Brazil right now… and many folks are trying to profit.

Brazil is currently hosting the 2014 FIFA World Cup. Soccer is the most popular sport in the world. That’s why, according to Las Vegas bookies, World Cup betting is twice as big as the Super Bowl.

So far, though, the popular bets aren’t paying off.

[ad#Google Adsense 336×280-IA]Spain – the last World Cup champion – was the favored bet against both of its early round competitors.

But Spain lost both games. Ghana was the slight favorite to win its game against the U.S… the U.S. won.

Portugal was favored to beat the U.S. in Sunday’s game… they tied.

It has been a rough ride for most of the gamblers betting on the World Cup games so far.

So here’s my advice if you really want to profit off what’s going on in Brazil right now… Bet against the Brazilian stock market.

The Brazilian stock market has moved sharply higher over the past few months. It’s trading more than 20% above its March low. And everyone seems to think the rally will continue.

The Brazilian stock market is near a peak and the odds favor a downside move from here. 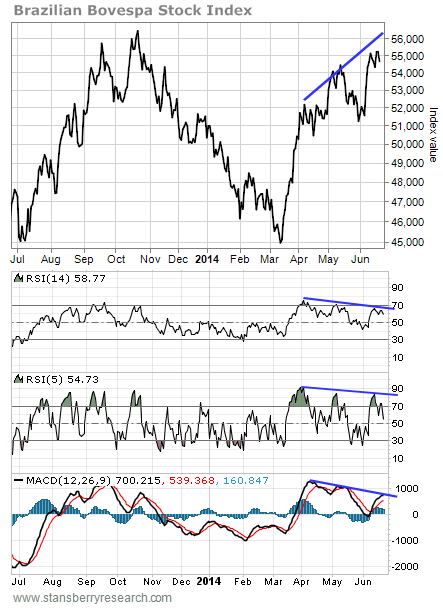 As I said, the Brazilian stock market has moved sharply higher over the past few months.

This is an ideal setup for a short sale.

If you’re looking to profit off the situation in Brazil right now, I would avoid betting on the World Cup games. Instead, take advantage of the chance to profit on the potential downside in the Brazilian stock market.