For the first time in years, I’m buying commodities…

In the March issue of my True Wealth Systems service, I recommended a very specific way to buy commodities – through an exchange-traded fund (ETF).

Most people don’t know this… but investing in commodities is tricky… Doing it the wrong way can result in BIG losses – even if commodity prices go higher.

And more importantly, I’ll show you how to get around the problem, and potentially make big gains in commodities, starting now.

Most folks don’t know just how dangerous investing in commodities is.

The problem is how typical investors make commodity investments.

If you’d bought oil at the bottom in late 2008 through an oil index fund that tracks the price of oil, then you would have tripled your money, right?

Most individual investors would have bought the United States Oil Fund (USO) to take advantage of oil prices potentially rising. This fund exists to track oil prices. It attempts to do so by using “futures” contracts.

Buying oil in late 2008 would have been a brilliant idea… But if you’d bought shares of USO to make the trade, you would have lost money. 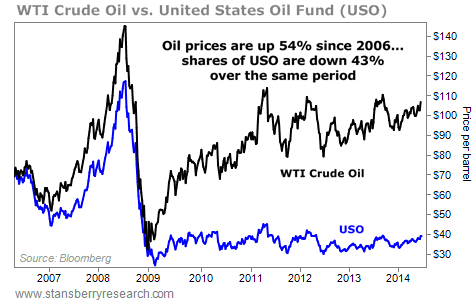 What went wrong? How could an investment thesis that was right turn so sour?

The answer to those questions – and the reason investing in commodities can be dangerous – is explainable with a single word… “contango.”

I’d bet 99% of investors have never heard of contango. But it’s incredibly important when it comes to investing in commodities. And it’s the exact reason shares of USO dramatically underperformed oil prices.

You see, USO doesn’t hold barrels of oil. Instead, it invests in oil by purchasing oil futures contracts. These are an agreement to buy a certain asset – oil in our example – at a certain price on a certain day.

In the case of oil, there is a futures contract for every month of the year. The way those prices relate to each other can create contango. In short, contango means that next month’s price of a commodity is higher than this month’s price.

The table below shows hypothetical oil futures prices. These aren’t today’s actual prices, but they isolate the problem of contango. Take a look:

As you can see, the lowest-priced futures contract in this example is the current month (known as the “front month”). As you go farther out in time, prices get higher and higher. This is a killer for investors…

You see, USO attempts to track oil prices by holding the front-month futures contract. The front month usually has the most trading volume and most accurately tracks the true commodity price.

However, when the current front month expires, USO must “roll” the position into the next month’s futures contract. And when contango exists, that’s expensive…

In this case, selling the July contract nets $100. USO then immediately buys the August contract for $102. In short, the fund loses $2 for every contract it owns.

This happens month after month to commodity funds when the commodity they own is in contango. In the case of USO, it turned a trade that should have been up 200%-plus into less than 50% gains.

However, there’s one commodities fund that turns this idea on its head. Instead of losing money to contango, it makes money from it… and beats the benchmark commodity index in the process…

The fund goes by a simple name… the U.S. Commodity Index Fund (USCI). And this fund’s unique structure makes it a fantastic way to profit from a commodities boom.

You see, USCI tracks the SummerHaven Dynamic Commodity Index (SDCI). SDCI strives to take advantage of situations in commodities that tend to happen over and over to produce superior returns.

In short, instead of buying and holding all commodities like a typical fund, the SDCI only holds the commodities that history says should perform the best over the next month.

Specifically, it holds 14 of 27 possible commodities based on two simple criteria…

These two criteria have been proven over decades to make real money. Let me briefly explain them…

The first criterion, “backwardation” – is simply the opposite of contango. This means the SDCI specifically buys commodities that allow it to make money by “rolling” positions.

In short, the SDCI not only avoids the problem that makes most commodity funds terrible investments… it makes extra gains by doing the opposite trade.

The SDCI selects its first seven commodities based on this idea… buying the commodities with the largest backwardation available.

It selects its next seven holdings based on the strongest uptrends in commodities (based on trailing 12-month price change).

Over the last 20 years, this way of investing has delivered huge gains…

You see, while the CRB increased just 134% in value over that period, the SDCI returned nearly 10 times that gain… up a staggering 1,331%. And based on annual gains, the SDCI tripled the return on general commodities… up 14.2% a year versus 4.3% a year for the CRB.

Like I said, commodities can be dangerous for the average investor. But with shares of the United States Commodity Fund (USCI), we’re able to rid ourselves of the usual problems.

History shows USCI isn’t just safer, it should lead to much larger gains as well. With commodity prices finally beginning to move higher lately, it’s an opportunity you don’t want to miss.