But history shows they COULD actually stay low for years to come.

Don’t believe me? Then please, read on…

You might be surprised to hear this… but not a single expert believes that interest rates will go down from here.

OK, there is actually one guy who believes interest rates could fall – out of the 90 different institutions that make forecasts (according to Bloomberg).

[ad#Google Adsense 336×280-IA] As a group, those “experts” believe the interest rate on the 10-year U.S. Treasury bond will rise about 1% over the next year.

Let me repeat that:

Exactly 1 out of 90 experts expects interest rates to fall over the next 12 months.

In short, the “smart money” is making a one-way bet on higher interest rates this year.

So far, the smart money has proven to be completely wrong…

You would think that when everybody believes something, it must be right… no? But the truth is different in the financial markets…

As my good friend Rick Rule likes to say, “in the markets, you’re either a contrarian or a victim.” Looks like we have one contrarian and 89 victims out of the Bloomberg experts.

Interest rates in the U.S. could easily stay low for years…

Could that really happen? Consider the case of Japan…

Japan experienced a massive stock market and economic bust in the late 1980s. The country has been fighting deflation and slow economic growth ever since. And like the U.S., Japan cut short-term interest rates to near-zero in the mid-1990s.

Since then, Japan’s long-term interest rates have headed lower and lower. Just like we’re seeing with the “experts” in the U.S. today, the “experts” in Japan have tried to bet against this lower-interest-rate trend for 20 years.

It has been a losing battle – to say the least. The scary thing is, rates in the U.S. today look a lot like Japan’s did back then. Take a look… 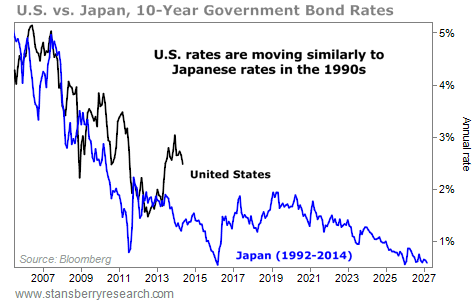 As you can see, our current rate drop in the U.S. is similar to the mid-1990s drop in Japan. And today, more than 10 years later, long-term interest rates in Japan remain well below 1%.

My point is simple… everyone expects interest rates to move higher… But history shows they COULD absolutely stay low for years to come.

I am not predicting they WILL go lower… I am just saying that they COULD.

I also want you to be aware that – if you are betting on higher interest rates today – you are NOT being a contrarian. (Instead, you are a “victim” in Rick Rule’s explanation.) The contrarian bet would be to bet on lower rates.

I do agree that – in the long run – interest rates will move higher. But I am not willing to bet with real money when that date will be.

In short, I just want you to be aware of one thing: If you are betting on higher interest rates, then you are betting WITH the entire crowd – and that is usually not the most profitable place to be…