Today’s kids are different than when you and I grew up. They’re computer-savvy, smartphone-savvy… in fact, at first glance, they almost resemble mini-adults.

It’s no surprise, then, that sales for toy makers have been sluggish over the past few years. Add in the fact that stagnant wages have parents watching their wallets when it comes to spending on toys for their kids, and it might seem wise for investors to stay away from this space.
Big mistake.

And with the licensing deals that come from movie and game franchises, it can be a lucrative venture for the companies that can “get it right.”

Toy maker Hasbro (Nasdaq: HAS) has been a perfect example of this.

You can see how this has worked out for the company — and its investors:

The company I want to talk about today — Mattel (Nasdaq: MAT) — sells toys in 150 countries and controls 17% of the U.S. toy market. But it has not been able to use the potential of licensing to the same effect as Hasbro. Until now.

Mattel just announced a major acquisition that will open up a new market segment and could lead to some real advantages of scale. The acquired company is just 3.4% the size of the buyer — but controls 10% of the U.S. market in the construction toys segment against the buyer’s measly 1% market share. The target also brings with it licensing deals for popular brands like Call of Duty, SpongeBob SquarePants and the Power Rangers.

This alone would make it seem like a strong addition, but the economics get even better when you consider the potential synergies for the two companies.

Mega Brands (TSX: MB), the target company, has a presence in just 17 countries and booked three-quarters of its $405 million in revenue from construction toys last year. Despite Mattel’s sizable footprint in the toy industry, it has not been able to break into the construction toys segment.

After the merger, the Lego Group will still control 75% of the construction toy segment worldwide but will have a hard fight to maintain its dominance. With Mattel’s global reach and marketing budget, Mega Brands should be able to gain share in the lucrative pre-school age groups. The low-tech interlocking brick segment has not changed in decades but was the fourth-fastest growing toy category last year.

Mattel already has a licensing and distribution deal with Disney and Pixar that gives it access to characters such as Mickey Mouse and characters from the Toy Story and Cars movies. Mega Brands has been building its own licensing portfolio over the past several years and worked with Mattel on licensing the Barbie and Hot Wheels brands for its Mega Bloks. 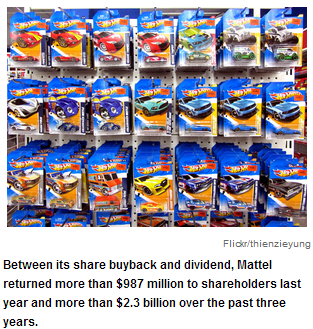 The company covers its interest expense with earnings by 11 times and only finances 33% of its capital structure with debt, compared with Hasbro’s coverage ratio of 2.7 times and 45% debt.

Mattel is paying for the Mega Brands acquisition with cash but has said that it will issue $500 million in debt.

I wouldn’t invest in a company on the hope that it can turn an acquisition into growth, and Mattel is no exception.

The shares pay a yield of 3.8% with a strong history of returning cash to shareholders.

Between the buyback and dividend, the company returned more than $987 million to shareholders last year and more than $2.3 billion over the past three years.

While sales have fallen in the U.S. market, Mattel is still booking strong growth overseas. Growth is especially strong in emerging markets where a rising middle class is opening up discretionary spending on toys.

Mattel currently trades at a forward price-to-earnings (P/E) ratio of 14, under the five-year average of 14.9 times and well under Hasbro’s trailing P/E of 22.6. Earnings are expected at $2.81 per share in 2015, which would yield $42.15 (10% higher) at a P/E multiple of 15, but I expect the Mega Brands acquisition could lead sales to surprise higher.

With a beta of 0.8, shares of Mattel are a defensive play and may not rise as much as the overall market on a strong economic recovery. On the other hand, shares will likely not fall as fast as higher-beta names if the market tumbles. Global toy sales will probably pace along at a reasonable rate, but Mattel stands to win big by taking a larger share of those sales.

I have a target of $46.40 per share based on $2.90 in 2014 earnings and stronger investor sentiment as the Mega Brands acquisition starts producing share gains. A buy-under price of $42 a share allows for 10% appreciation to that target on top of the attractive dividend yield.

Risks to Consider: Toy makers face substitution risk as children age out of toys and into electronics at an earlier age. Mattel still has a relatively limited product line of these toys and will probably focus on younger age groups.

Action to Take –> Long-term investors can feel confident that Mattel will continue to return cash to shareholders and is relatively cheap compared with its peers. Growth in emerging markets and on a recent acquisition has the potential to boost returns over the next couple of years.

Sponsored Link: My colleague Nathan Slaughter has found a new way to maximize returns from dividend stocks. This strategy not only pays dividends but also factors in two other forms of “extra” payment that enrich shareholders and reduce the risk of heavy losses in market downturns. We call them “Total Yield” stocks — and last year, 24 out of 25 of the stocks with the highest Total Yield ratings more than doubled the S&P 500’s return. To learn more about his Total Yield strategy, check out this free presentation.