In March, Matt Badiali told you the natural gas rally was ending.

Cold temperatures across the U.S. caused natural gas prices to jump this year. The price spiked as high as $8 per thousand cubic feet (MCF) in February and has held above $4 per MCF in 2014.

Matt said prices would head lower over the next year – and it’s still likely they will. So far though, prices have increased since his essay. And this gives traders the chance to earn some short-term gains.

As Matt explained in March, natural gas prices have been low for the past several years.

New technologies have allowed oil and gas companies to tap into massive amounts of gas.

The increase in supply drove the price down.

However, the severe winter across much of the U.S. pushed demand for natural gas higher than expected this year as consumers and businesses were forced to increase their gas and electricity use to stay warm.

We’ve used so much natural gas that the volume left in storage is at its lowest amount in a decade. This drove prices back up, as you can see in the chart below. 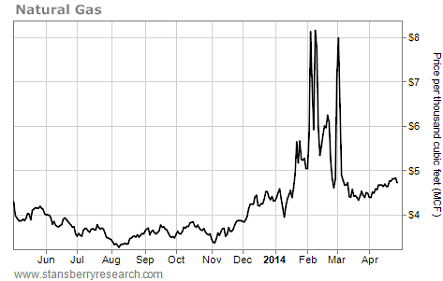 After spiking in February and early March, prices have remained above $4 per MCF. In the past month, they’ve even ticked higher.

And the companies that supply natural gas are benefiting.

Giant oil and gas producers like ExxonMobil will likely see the benefit of higher gas prices next quarter too. However, these are huge companies. And trouble in other parts of their operations could erase these gains.

If you’re looking to take advantage of the higher natural gas prices, I recommend looking at natural gas-focused royalty trusts.

Royalty trusts are some of the simplest oil and gas companies in the world. They don’t drill wells or look for new fields. Their only job is to collect income from gas wells and pass most of it on to their “unit holders” (like shareholders).

The main reason oil and gas producers create royalty trusts is to avoid corporate taxes. Normally, a company pays taxes on the profits from the oil and gas it produces. However, with a royalty trust, as long as the trust distributes 90% of its profits in the form of “distributions” to investors (like dividends), it doesn’t pay corporate tax. Instead, the investors pay taxes on the income. As a result, you can often find them offering big, safe yields.

For example, the San Juan Basin Royalty Trust (SJT) is up nearly 30% in the past year. Most of these gains came after the weather got colder.

I expect these big distributions to continue in the near term as natural gas prices stay strong. In May 2013, SJT’s monthly distribution was $0.04 per unit. Last month, it increased to $0.10. That’s a 150% increase in a year.

And it’s not the only natural gas-focused royalty company that’s up this year.

The Cross Timbers Royalty Trust (CRT) and Sabine Royalty Trust (SBR) are up 12% and 7%, respectively, over the past year. And there should be more upside ahead in the short term. They both yield 7% and are paying out big distributions to investors right now.

I recommend taking a closer look at these names to take advantage of the uptick in natural gas prices.

Be careful, though. As Matt told you in March, this winter was an anomaly. Natural gas production is steadily growing. This will replenish the gas in storage. And it will help push natural gas prices back down. These names are not long-term holds. If natural gas prices fall below $4 per MCF, look to exit.