Australia could be near-debt-free by the end the decade.

It’s nearly impossible to believe in our debt-fueled world. But it’s true.

Last week, Bloomberg reported that Australia’s national debt could “decline to just over 5% of GDP.”

And Australia could sell assets and cut welfare spending to further reduce debt. This is from a country that already has the second-smallest debt burden among developed countries, according to Bloomberg.

It is in great financial shape… and it is actively reducing debt – unlike the U.S., which continues to add trillions per year in new debt.

And importantly, we have an easy way to invest today… collecting a safe 4.4% yield in the process.

It’s one of the oldest rules in finance.

It’s the simple idea that investment dollars tend to go where they have the best opportunity for returns, given the risk involved.

Right now, you earn next-to-no interest on your U.S. dollars and euros in the bank. But you can earn nearly 2% in interest on your cash by simply holding Australian currency. That’s unbelievable!

The same is true in the Australian stock market. Today, U.S. stocks pay a dividend yield of just 2%… a paltry sum compared to the 4.4% you can earn in Australian stocks.

So I expect Australia to thrive as money continues flowing into it. Plus as I said above, because of the country’s low debt, it’s a safe place to put money to work. The best – and easiest – way to take advantage is through the Australian stock market.

Take a look at the chart below. It shows the 20-year history of Australian stocks and their dividend yields. As you can see, today’s dividends are near all-time highs (excluding the financial crisis)… 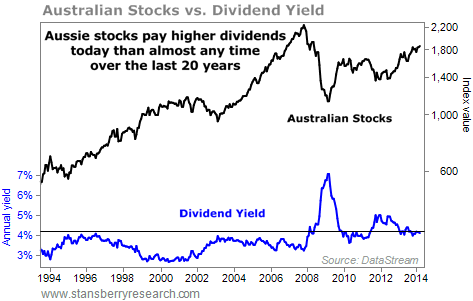 Over the last 20 years, Australian stocks paid an average dividend yield of 3.8%. But right now, the iShares MSCI Australia Index (EWA) pays a 4.4% dividend. EWA is a simple fund that tracks the Australian stock market.

That means you can buy these stocks for a 10%-plus discount, based on dividends. Not to mention that it’s nearly impossible to lock in a safe 4.4% dividend anywhere else these days…

Money should continue to flow to where it’s treated best… Over the next few years, money will be treated best in Australia. And with the country actively reducing its minimal debt load, the Australian stock market offers safety.

We have a great way to make the trade today with EWA.

Don’t miss this opportunity to move cash into the safest country on earth… and earn a 4.4% yield in the process.