Last week, I told you about the “shift” in U.S. oil production. In short, oil production is dropping in some of the top U.S. oil-producing areas like Alaska, the Gulf of Mexico, and California.

This “shift” in where oil is produced is due to the growth of “unconventional” oil production in shale areas like Texas’ Permian Basin and Eagle Ford and North Dakota’s Bakken.

New technologies like fracking and horizontal drilling allow oil companies to drill multiple wells in the same drilling site in these shales, rather than the conventional method of just one well at each site.

More and more oil companies are choosing to invest in shale areas as a result.

S&A Resource Report recommendation Penn Virginia (PVA) is one of these companies.

However, the company didn’t buy just any oilfield. It shifted its focus to the Eagle Ford.

Penn Virginia now has a 10-year drilling inventory in the Eagle Ford. This inventory continues to grow as the company finds more reserves.

And since 2011, Penn Virginia’s oil production in the Eagle Ford has grown almost fourfold.

As a result, Penn Virginia’s stock price is up nearly 300% in one year. S&A Resource Report subscribers are up about 133% in six months. 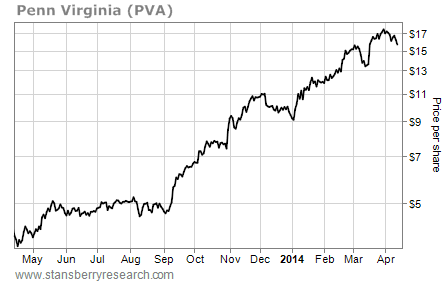 And at this pace of growth, the price should continue higher.

Other companies that are profiting from the “shift” in oil production are Sanchez Energy in the Eagle Ford and Laredo Petroleum in the Permian Basin. Both of these companies own prime real estate in these areas. As a result, their oil production – and share prices – should increase in the years to come.

I suggest getting some exposure to these companies before they take off.