My friend, it is time for me – and for my subscribers – to move on from biotech.

The ride has been fantastic. But it’s now time to go.

$10,000 would have turned into $44,000 in just over two years in biotech, if you’d followed my biotech recommendations in my True Wealth Systems letter. (We just sold our biotech fund in TWS two weeks ago.)

So if you bought biotech when I recommended it, and sold today, you’ve pocketed an 89% return.

Those are huge gains in both letters. Those were great trades.

What makes up a great trade?

A great trade has a good buy AND a good sell. You haven’t completed a great trade until you have both.

With a good buy AND a good sell, our great trade in biotech is now complete.

The amazing thing is, I admittedly know very little about biotechnology… I am not a doctor. (Doctors are often bad biotech traders, because they don’t know when to sell.) I don’t have any special medical insights.

However, I believed I knew enough to make this trade…

I knew the two most important things. I knew that:

1) I wanted to be in any biotech uptrend when it takes hold. Bull markets in biotech can be worth hundreds-of-percent profits – and you want to be a part of that. Also, I knew that…

2) Any bull market today can run higher than anyone can imagine, thanks to the Federal Reserve’s “easy money” policies. So you want to stay on board until you can’t stand it anymore.

I didn’t need to be a doctor to make large profits in biotech… I just needed to get onboard at approximately the right time, and stay onboard.

At this point, I have done that.

The hard part is deciding when to get out. (Again, this is where the doctors often fail.)

Since I have no expertise in biotech, I used a “trailing stop” to take me out of my trade…

A “trailing stop” is my maximum acceptable loss… It is the point at which I cry “uncle,” barring anything else happening before it.

When I originally made my True Wealth biotech-fund recommendation, I used a standard “percentage” trailing stop in my newsletter. Since then, I have switched to using Smart Trailing Stops (from our corporate affiliate TradeStops) in my letter.

You can see the Smart Trailing Stop for our biotech fund in this graph: 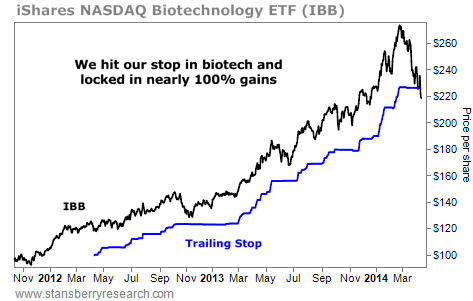 As you can see, while our biotech fund went up in price, our Smart Trailing Stop followed it higher.

And now that our biotech moved lower, it triggered our Smart Trailing Stop. Our “point of maximum pain” was hit. It is time to sell.

Once again, we are selling with an 89% return. Not too bad.

Personally, I believe biotech can go higher from here. However, I’m smart enough to recognize that I have no expertise or special insights here. So the smartest thing I can do is to maximize the value of my good decisions and minimize the impact of my bad decisions.

Smart Trailing Stops are a simple way to do that.

If you are a True Wealth subscriber or a True Wealth Systems subscriber, I urge you to clear out your biotech positions now. It is time for us to complete what has turned out to be a great trade…

And now we have hit our trailing stop. Let’s move on…

I really believe trailing stops are the secret to selling at the right time today – especially in this era where the Fed is printing money and stocks can go higher than you can possibly imagine.

So I highly urge you to get up to speed on trailing stops, so you can make great trades, too.