Winter Storm Pax blew through Augusta, Georgia in February… It also blew three tree limbs straight through the top of my house.

It wasn’t a total disaster. No one was hurt. The interior damage was minimal. But I have tenants renting my house for the famous Masters golf tournament next week, so it needs to be fixed.

My experience with the whole thing speaks volumes about America… and what is potentially coming for investors. My conclusion might sound crazy to you… and that’s a good thing.

[ad#Google Adsense 336×280-IA]Although the storm hit six weeks ago, the holes in my roof are still there.

It took weeks to get a contractor to just come and look at it… and even longer for him to schedule the work.

Meanwhile, I cringe every time the Georgia weather report calls for rain.

I thought I’d have no problem getting someone to come see the house.

Though places like Florida, Las Vegas, and California took the brunt of the real estate bust of 2008, Georgia wasn’t far behind.

It’s a Sun Belt state with beautiful wilderness, a growing population, and delicious (if a bit unhealthy) food.

Had you tried to get a contractor during the boom of 2007, you’d have likely waited months. But after the bust, things were different. It became a “buyer’s market”… not just for housing, but for contractors, plumbers, and anything else that had to do with the local economy. Even the rental rate on my house for the Masters dropped by half.

So when that tree fell through my roof, I expected to see several competing offers from anxious roofers looking for work. I had no idea I’d have to wait more than a month for repairs. One company said it would be three weeks just to get an estimate.

The economy is simply better. Not perfect. Not booming. But if you look at any economic chart since 2009, activity of all kinds is picking up (I showed you some interesting ones last week in this essay).

For years now, whenever I shared my optimistic view of the economy, my inbox would flood with naysayers telling me to “open my eyes” and “prepare for the collapse.”

Needless to say, I’ve been right so far. The market is at new highs. Readers of my Retirement Millionaire newsletter have made a fortune with their U.S. stock and bond investments. Investors who allowed their fear to get the better of them were left behind. Some are still wondering whether it’s safe to invest in stocks.

Earlier this month, I sent a letter to subscribers of my Retirement Millionaire newsletter showing them a flurry of positive economic indicators. This time… I received hardly any critical feedback.

You can see it in the data, too. Consumer sentiment has consistently been hitting new highs since the 2009 lows. It just reached five-year highs in January before falling back a bit in February. 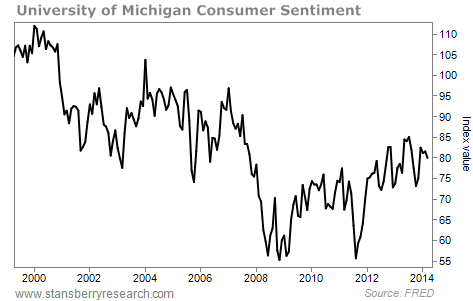 People are feeling better. And this is a critical point… A rising economy is a “virtuous cycle.” People feel good and spend money. That allows other people to make more money, which makes them feel good and encourages them to spend.

Up until now, the economy has been chugging along. But the re-emergence of consumer confidence could lead to a stronger wave, even a serious boom in the markets. Remember, the consumer accounts for around 70% of the U.S. economy.

If people simply stop feeling less gloomy… and start to realize the economy is showing clear signs of improvement, it will create a heck of a lot more demand for things like cars, vacations, and homes. Demand here has already improved from 2010 and 2011 levels. But it could grow much, much stronger.

Again… I know it might sound crazy to you. An economic boom? If it does, just remember people thought I was crazy in 2011 to say the economy was recovering… and would continue to recover. Yet here we are. Stocks and real estate are up big. The economy is improving.

Now, the word is getting out… and people are starting to feel better. That’s why I’m urging Retirement Millionaire readers to hold on to blue-chip businesses like Intel and McDonald’s… and I encourage you to do the same.