Interest rates are on the verge of a big move.

For the past two months, the yield on the 10-year Treasury note has been stuck in a tight trading range between 2.6% and 2.8%. That’s a remarkable display of stability in the face of an unstable environment.

Think about it… Over the past two months, Ben Bernanke retired and we got a new Federal Open Market Committee (FOMC) Chair.

And Russia took over Crimea.

Given that news flow, interest rates should have been bouncing all over the place.

But that didn’t happen.

It has been quiet in the interest-rate market. But that’s about to change… 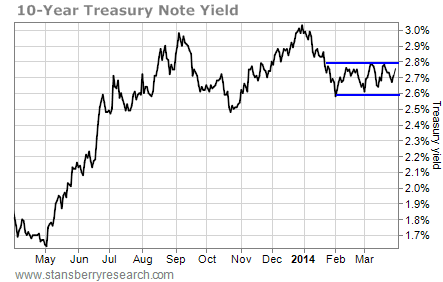 It’s hard to find another two-month period where the yield on the 10-year Treasury note has stayed in such a tight trading range.

Longtime Growth Stock Wire readers know that periods of low volatility are always followed by periods of high volatility. So when this quiet period in the interest rate market ends, it’s likely to be followed by a big move in one direction or the other.

And, that “big move” may get started soon.

Here’s another look at the 10-year Treasury note yield… 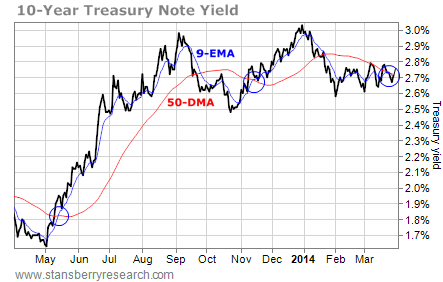 The blue and red lines on the chart show the nine-day exponential moving average (EMA) and the 50-day moving average (DMA), respectively. These are different ways to look at the trend of interest rates.

The blue circles on the chart show the times over the past year when the nine-day EMA crossed above the 50-DMA.

It looks like the quiet period for interest rates is ending. Rates are on the verge of a big move. And based on history, that move is likely to be higher.

Look for the yield on the 10-year Treasury note to challenge the 3% level sometime within the next several weeks.