If you’re still worrying about the economy… it’s time to stop.

Longtime readers know I follow a vast set of “common sense” economic indicators and talk with everyone from cabbies to corporate presidents. I also carefully look at data and statistics to make sure there are no signs of trouble ahead…

Last August, I shared three simple charts that showed things were headed in the right direction…

[ad#Google Adsense 336×280-IA]And in today’s essay, I’m going to share a few more signs that our economy is recovering, albeit slowly… chugging along with small improvements here and there.

First, the data say consumers are increasing both their saving and borrowing.

These are good signs.

Personally, I believe that’s too low of a savings rate for anyone looking to secure his or her future.

But it’s above the savings rate Americans maintained for most of the 2000s.

Americans have also decided to borrow more on credit cards…

The growth rate of credit borrowing has also swung back into positive territory after going negative during the recession. While going into debt isn’t a good personal decision, it shows the average American is spending again. If this rate were to drastically outpace inflation, it would indicate reckless spending. But at these levels, it’s a good sign.

Next, on the big purchases, the average American is deciding to buy things. Automobile sales hit 15 million in February and they keep rising. Spending on durable goods – big things like appliances, furniture, and electronics — also keeps chugging along. 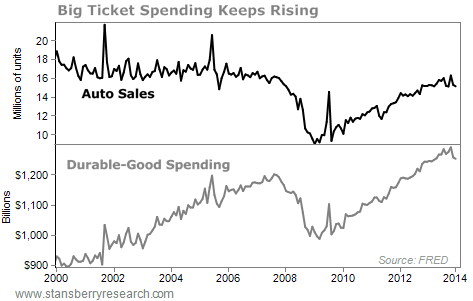 A neighbor of mine in Augusta is an architect. He recently told me his business is approaching the levels it was at before the recession. And the data back him up…

The Architecture Billings Index (ABI) is a leading indicator that provides a picture of nonresidential construction activity for the next nine to 12 months.

As you can see in the chart below, we’ve seen a steady uptrend here since 2009. And right now, the data confirm that we’re approaching the levels we saw before the crisis. Again, this is a great sign for the economy as a whole. It means businesses are investing in expansion and growth. And that’s mainly driven by the uptick in consumer spending…

Inventory levels cycle up and down with economic times. When business owners are optimistic about the near future, they’ll stock up on inventory. Right now, that’s what we’re seeing. The inventory-to-sales ratio shows businesses deciding to add goods to their shelves and storerooms.

By looking at total private-business sales, we can see that inventories are rising by choice, not because people aren’t buying. With sales and inventory rising, it suggests that management has made a conscious decision to prepare for better times ahead. 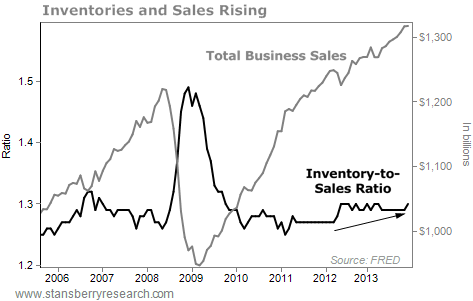 I’m not going to claim that the U.S. economy is in amazing shape…

But there is no doubt that it has been improving steadily for nearly four years now with few missteps along the way.

Anyone who says otherwise is looking at something other than the factual data the economy is giving us.

Recessions come in different forms. Some are caused by what we’d call “economic shocks.” These are outside influences that can’t be predicted, like the oil crisis of the 1970s. Others result from natural ebbs in the business cycle.

Economic shocks are unpredictable. We always face the risk of something unforeseen knocking the economy off course. But I feel confident making this prediction… The risk of the U.S. economy “backsliding” into a recession is extremely low.

Based purely on economic factors, everything is steadily improving and generating the sort of momentum that allows the economy to sustain itself.

Each of us only has so much energy for worrying, and it takes a toll on our health. If you’ve been afraid the economy was still bad, cross those worries off your list.