On [Saturday], I explained how a privately held company called Enduring Resources is about spark a “land rush” in West Texas.

Then on [Sunday], I revealed exactly where in Texas this land rush will take place… and why its potential is so great.

Today, I’m going to share the secret my readers are using to make money in the land rush. It’s a secret that will help you make money in any shale play.

Over the years, I’ve watched closely as the big seven shale plays evolved.

In each one, there were three main phases: Science/Exploration, Development, and Factory.

In the Science/Exploration phase, companies are slowly gathering information about the rocks.

The companies collect seismic data to image the rocks. They collect core samples from the wells as they drill. They experiment with different horizontal lengths and different ways of fracking.

Remember, fracking is the process of injecting high-pressure water and sand into the shale to open up the cracks. The way the engineers “frack” the well can have a huge impact on how much oil it produces. It takes time and practice to determine that process.

More often than not, these first wells are only marginally economic. The purpose of this work is to determine exactly what to do to make the rest of the play pay off big.

Finally, the shale becomes an oil and gas Factory. Companies drill thirty or forty wells every three months. To save time and money, operators drill five to 10 wells from the same “pad” (a flat, cleared drilling site), rather than the conventional method of clearing a new pad for each well. Operators also employ complicated “zipper” fracks, where two wells are fracked simultaneously to create a more efficient web of cracks to drain the oil. Through these methods, regional production improves dramatically.

And the value of the land soars…

In the Factory stage, where the Eagle Ford is today, we can see companies pay as much as $50,000 per acre for the right to drill wells there.

Take Continental Resources (CLR), for example. Continental is the company that broke the Bakken Shale wide open. The chart below shows what a business can become if it grows a shale from Science to Factory: 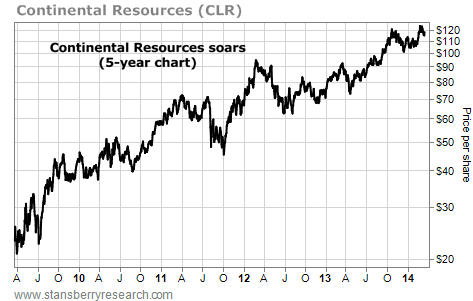 Continental Resources’ shares climbed 778% in just over four years. The market was willing to pay more for its shares as the value of its assets grew. I expect Continental’s share price to keep going higher.

For investors, it’s important to know that the biggest gains come in the early years. They come during the Science and Development phases. However, this is the riskier, more uncertain period. You typically only want to invest in this period if you have unique insight into the geology. You also don’t want to bet the rent money on companies with heavy exposure to this stage.

Safer investment gains come from companies in the Factory stage. This is where Continental has been since 2012. Of course, the gains come slower… but at least the company has a good working knowledge of the area. These companies can still be great investments… they are just more conservative investments.

The unique part of the coming Permian Basin land rush is that an overlooked area – its Eastern Shelf – is about to move from the Science stage to the Development stage. Remember, this is typically a riskier stage… where both gains and losses can be large.

However, we have unique insight into this area. We know privately held Enduring has had huge success here. And the rest of the world is about to know it.

Investors who buy the companies with the most exposure to the Eastern Shelf stand to make early-stage-type gains (which can easily go into the hundreds of percent)… while enjoying late-stage certainty that the area is full of oil.

It’s like having our cake and eating it too…

Enduring plans to sell off its acreage soon. It will reveal vital data about this area. It’s a chance for companies to see exactly what the rocks look like… and how much oil they hold.

It will cause a major revaluation of assets in the area… And a few small companies operating there will see massive share price gains. It will happen no later than this summer… so get in now.