It’s about to become the next giant shale play…

Yesterday, I explained how a virtually unknown company was about to shock the energy world.

As I said, this company is about to reveal secret geological data that will kick off a “land rush” in West Texas this summer. And it’s going to send the share prices of some small oil stocks much, much higher in the coming years…

[ad#Google Adsense 336×280-IA]Today, I’m going to share more about this region and why its oil-producing potential is so large…

If you look out an airplane window above the Midland airport in West Texas, you can see one of the most prolific oil shales in the world, the Midland Basin.

It lies at the heart of the giant Permian Basin.

As you can see in the photo below, the Midland landscape is a checkerboard of light squares on a darker brown background.

Each light square is an oil well connected by a road. 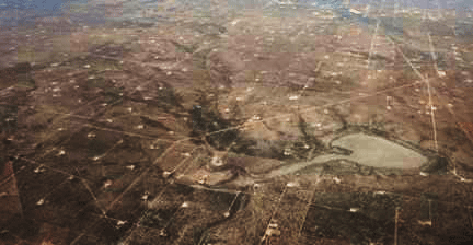 These are the new horizontal wells in the Wolfcamp/Spraberry shales of the Midland Basin. The area is a historically prolific oil-producing region.

The Santa Rita No. 1 was the first commercial oil well in the Midland, drilled in 1921. It flowed for 70 years. Since that first well, the “conventional” oil wells here have produced about 29 billion barrels.

But in 2010, shale-oil exploration – the type of exploration we’re using with new drilling technology – took off in the Midland…

That year, operators drilled about 2,281 exploration wells. In 2013, they drilled 10,220 wells. This is why the region looks like it does today. It’s dotted with thousands of drill sites.

Major oil regions like the Midland are giant lost ocean basins. Oceans produce lots of tiny organic particles and bits of clay that sink into the deepest, calmest part of the basin. Over time, these deep spots in the basin become thick layers of organic material and clay that, when compressed and heated, become oil- and gas-rich shale layers.

But these government estimates are notoriously poor. Today, the famous Bakken Shale in North Dakota produces more oil in a year than the USGS once predicted it would produce in its lifetime.

For most oil producers today, the Midland is the “sweet spot” of the Permian.

But just to the east lies our “sleeping giant”… an area called the Eastern Shelf.

Underneath the Shelf are the Cline and Wolfcamp shales. This is the area I mentioned yesterday. The small company I mentioned, Enduring Resources, is about to reveal amazing production numbers… which will set off a land rush in this area.

The good news is that the growth of these shale plays is now predictable… We’ve cracked the code to time their growth.

You see, shale plays go through three distinct stages as they grow. If you know which stage the shale is in, you can easily understand your risks and potential rewards. [In my next essay], I’ll discuss how it all works… and how you can use it to make huge returns in energy stocks in 2014.