Any time you hear China mentioned in the mainstream media, the news is bad.

Most of that “news” is baloney. China is a juggernaut, regardless of the daily, weekly, or monthly fluctuations in its economic data.

However, many investors remain worried about China’s economy. They take any bad news as a reason to exit stocks linked to the country. When bad news hits, investors flee.

And it’s offering us some great buying opportunities…

The most recent selloff started on Friday when a solar company became the first Chinese firm ever to default on its Chinese corporate bonds.

The Chinese government and state banks had previously helped bail out firms that were in trouble.

This is no longer the case.

Investors now know there is no guarantee of such help in the future.

I see this as a reason to celebrate, not to panic. To have a healthy corporate bond market, China needs investors to know there is a risk their investment will go down. It is important to remove the guarantee that the government will step in whenever there is a problem. This encourages companies to only take out loans if they are confident they will be able to repay them.

But the bad news rattled investors. And they fled from stocks tied to the country – including major mining companies that rely on China’s demand for the raw materials they produce, like coal, iron ore, and copper.

As you can see in the table below, major miners crashed hard on Friday and Monday:

That was a clear overreaction. Despite any bad news, China’s demand for the raw materials these companies produce continues to grow.

Take a look at this chart of China’s long-term imports of copper and iron ore: 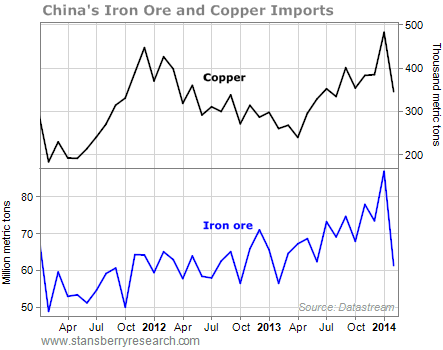 While iron ore imports fell in February this year, the volume is still 9% higher than February 2013. And while copper also fell this past February, the volume is still 33% higher than February 2013. These falls were mainly due to the Chinese Lunar New Year. You see, buyers increase their inventories for production ahead of the weeklong holiday, which began on January 31. That’s why in January, imports of both metals reached all-time highs… And why imports decreased in February.

Also notice on the chart that both iron ore and copper have been making higher lows and higher highs each year. I expect this to continue as China’s demand for the metals continues to increase.

This growth is important for copper producers like Freeport-McMoRan (FCX) and Southern Copper (SCCO). Freeport and Southern Copper are huge, global mining powerhouses. China’s continued purchase of copper supports the price of the metal… and their bottom lines.

And the recent selloff is giving us a great buying opportunity.

Freeport’s price-to-book ratio has dropped consistently over the past five years. At the current 1.56 level, the ratio is nearing its 52-week low of 1.42 from the second quarter of 2013.

Investors looking for long-term positions in major mining companies should use this as a buying opportunity.

When investors realize China’s demand for natural resources isn’t slowing down – despite any bad news – the share prices of these miners will benefit.