“When the Fed raises interest rates, look out!”

That’s the conventional wisdom… but is it right?

The truth is, history does NOT agree with the conventional wisdom on this one.

For the truth, let’s take a look at what happened the last few times the Federal Reserve significantly raised interest rates…

The Fed raised interest rates from 2004 to 2006. Instead of falling, stocks rose 18% during that time. (They crashed not too long AFTER the Fed STOPPED raising rates.)

Once again, instead of falling, stocks rose 10% during that time.

(And once again, they crashed not long AFTER the Fed STOPPED raising rates.)

The story is similar over the last 30 years… Stocks have consistently managed to go UP during periods of rising interest rates.

The gains were typically nothing special. But importantly, they were not losses. 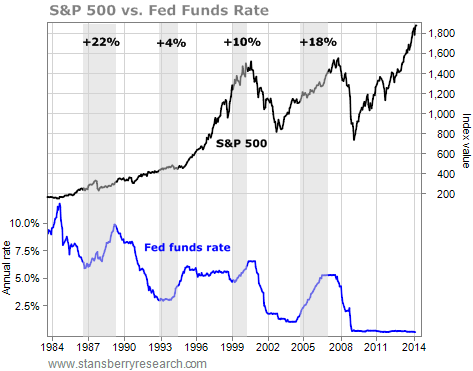 How can we explain this?

How could stocks go up when the Fed is “putting the brakes on” the economy?

If they are right (which is a big “if”), that doesn’t sound too bad to me.

Don’t get me wrong here…

I am not trying to minimize the situation the U.S. is in. And I am not guaranteeing that the stock market will go up when the Fed raises rates, just because it has over the last 30 years.

All I want you to see is that it is not the end of the world when the Federal Reserve decides to start raising interest rates.

It’s possible that investors will interpret it as a positive thing… that the economy is getting back to normal. And investors may continue to send stocks even higher.

Of course, the U.S. government is on an unsustainable path of spending, borrowing, and printing money. The danger is incredible – and a crisis is inevitable.

My point today is, a crisis does not have to start the day the Fed starts to raise interest rates.

Most investors think that day is the beginning of the end. History tells us that it is not… Don’t forget that.

Sponsored Link: Eventually, the stock market WILL crash… But I’ve already started to prepare. I recently attended a closed-door meeting at the New York Stock Exchange… where details of the next crash – and how to prepare – were revealed. You can get the full story right here.