Jim Rogers has one of the greatest track records in history…

He delivered a 4,200% return to investors of his legendary Quantum Fund in the 1970s… at a time when the U.S. stock market returned just 47%. And then he walked away from managing money.

Today, Jim and I agree on a major investment idea. We agree that the time has come to move a portion of your money OUTSIDE of the U.S. dollar… and into a place you’ve probably never considered.

[ad#Google Adsense 336×280-IA]I have a simple way to make the investment… and I believe it’s the safest place to park your cash over the next few years.

He believes it could be a triple-digit winner.

Either way, it’s an idea you need to consider today.

This summer, Jim predicted that China’s currency could soar by 300%, 400%, or even 500% against the U.S. dollar in the next couple decades. “If anyone wants to sell renminbi, I’d be willing to buy,” Jim said.

And just last month, Jim said he expects China’s currency to replace the U.S. dollar as the world’s most important currency in the next 20 years. (He is so optimistic about China, he moved his family from New York to Asia, and his young daughter now speaks fluent Mandarin.) 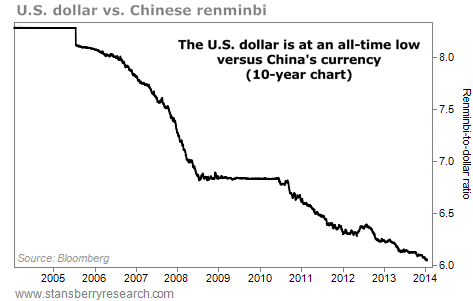 Importantly, Jim and I both believe this trend will continue for one simple reason… China’s currency is deeply undervalued.

The renminbi is undervalued by 30%-50%, according to The Economist magazine.

China’s currency has appreciated 3%-4% per year in recent years. I think that’s our “base case” going forward. However, we might do much better than that in the coming years… thanks to Janet Yellen.

“There will be a prolonged period of appreciation for the renminbi,” Li Daokui, a former adviser to China’s central bank, said when he heard Yellen got the job. He knows Yellen will keep printing money and keep interest rates at zero for a “relatively longer period,” which would further weaken the dollar.

So we can expect to earn 3%-4% a year in profits simply by holding cash in China’s currency – with the potential for much bigger gains if smart people like Jim Rogers are right.

The easiest way to make the trade is through a U.S.-traded exchange-traded fund (ETF) that pays a 3.3% dividend.

This fund holds a portfolio of “dim sum” bonds. A dim-sum bond is issued OUTSIDE of China, but it is IN China’s currency. This is exactly what we want.

With DSUM, you’ll earn a 3.3% dividend. PLUS, you’ll get the renminbi’s appreciation – around 3%-4% a year, maybe more. You may also see a capital gain as DSUM’s bonds increase in value. It could add up to 10% a year… in an income investment.

You MUST face the facts… You have too much of your wealth in the U.S. dollar…

According to one of the best investors of all time – Jim Rogers – the renminbi could overtake the U.S. dollar within 20 years as the world’s most important currency. And he says it could go up in value by 300%, 400%, or 500% in the next couple decades.

You can choose to ignore this trend and see your wealth in U.S. dollars shrink. Or you can position a portion of your portfolio in China’s currency to take advantage of it. I recommend parking some of your cash outside the U.S. through shares of DSUM.