I’ve told you before about the enormous number of high-yielding stocks abroad. If you remember, my research team and I found only 25 profitable U.S. companies were paying yields of more than 12%… compared to 93 overseas.

Although the numbers fluctuate daily, that means roughly 79% of the world’s highest yields are found outside of U.S. markets. To me, the amount of high-yield international dividend-payers out there is one of the market’s biggest secrets.

[ad#Google Adsense 336×280-IA]But there’s another big potential benefit to investing in international companies that most investors fail to consider.

This simple move could make investors extra gains of 10% or more — even in a single year.

It doesn’t require any extra effort… in fact, it happens automatically when you invest in international companies.

Here’s how it works…

Say five years ago you took the trip of a lifetime to Australia.

That means a hotel room priced at $100 Australian dollars only cost about $65 U.S. dollars thanks to a favorable exchange rate.

What does this have to do with increasing dividends?

Say you bought an Australian company five years ago that paid a dividend of $10 Australian dollars each year. Back then, you would have earned $6.50 in U.S. dollars after conversion.

The bottom line is if the U.S. dollar weakens against other major foreign currencies, then your dividends will increase over time… even if the company you invest in keeps its dividend payment the same.

The best news is that I see this trend continuing for at least the next two or three years.

And I’m not the only one noticing this. In fact, the numbers are staggering…

“The dollar’s decline over the past 30 years has been far greater than most Americans realize. It has lost almost half its value against other major currencies since 1985 and is down 33% in the past 11 years alone.”
— Time.com, March 20, 2013

But it’s not just dividends that benefit from a falling dollar when you invest abroad. Every dollar you invest sees the effects as well.

Recognizing this trend years ago — and investing alongside it — has already given international income investors a major boost. 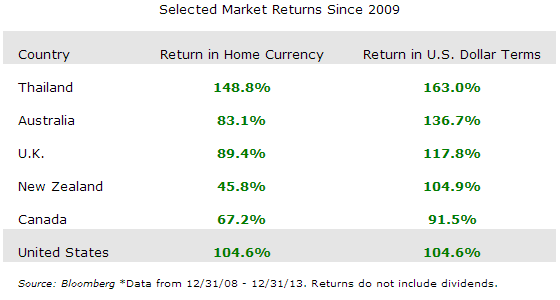 This table makes it easy to see how a falling dollar actually helps… if you’re invested abroad.

There’s even a good chance to make gains this way if the foreign market index you’re invested in falls. For example, when the New Zealand market declined 21.6% over a five year period (from August 2006 to August 2012) when measured in New Zealand dollars, it actually showed a gain of 2.5% for U.S. investors when you factor in the falling U.S. dollar.

Now keep in mind, if the dollar were to rally, the opposite would happen. Your returns and dividends would lessen by the amount the dollar strengthens. And while the dollar has rallied recently — for a variety of reasons I won’t bore you with today — I think the U.S. dollar will continue to lose value in the coming years.

That gives income investors plenty of time to take advantage of this unique opportunity.

And in my opinion, there’s no easier way right now to boost your profits. Especially since you can own many of the world’s highest yielders without even leaving the U.S. markets.

Sponsored Link: For more on international dividend-payers, I invite you to watch my latest presentation. I’ve included names and ticker symbols of 10 American companies that yield more than 12% (some yielding over 20%) and several high-yield international plays. Visit this link to watch now.