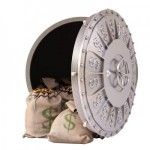 Yesterday, I shared the one, real secret to investment success…

It’s the most important idea I’ve discovered in finance… An idea you can use all the time, for your entire life, as an investor…

As I explained, understanding this secret helped Warren Buffett become the greatest investor in history. And if you fully grasp this concept, it’s very likely that you will succeed, too.

Simply put, some companies are vastly better than others at compounding capital.

To show you a bit more about how this works and how different these companies are compared with “regular” companies, let’s take a look at one of the companies that made our list last year…

To make it interesting… let’s take a look at one of the least likely companies to ever end up on a list of capital-efficient businesses – Heartland Express (HTLD), a trucking company.

How could a trucking company – with the huge capital investment required to maintain a fleet of trucks and trailers – end up in a list of capital-efficient stocks? How could a transportation company – supplying what’s essentially a commodity – be a great business?

Incredibly, this company earns 10% a year on its asset base, produces returns on equity of 20% annually, and carries zero debt. If you read Heartland’s latest letter to investors, you will see why almost immediately – exceptional management.

Heartland is the most efficient trucking company in America by a huge margin. Its operating ratio (operating expenses as a percentage of gross revenues) is the lowest in the industry.

As a result, its profit margins are the biggest: Heartland has earned a 12% net margin over the last five years. The company earns more than a dime on every dollar of revenue. Swift Trucking, a larger trucking company picked at random for comparative purposes, earned about 2.5 pennies on each dollar of revenue in 2012.

The difference in profitability means everything. Swift, unlike Heartland, can’t generate enough cash to afford its massive annual investments in trucks and trailers. So it has to borrow. It currently holds $1.3 billion in debt, requiring more than $100 million a year in interest payments. That makes a huge difference in a competitive business like trucking.

There’s also no money left over for shareholders. Over the last three years, Swift hasn’t returned a penny to shareholders. And instead of buying stock, the company has been issuing it – more than $800 million worth. It’s as if, rather than working for the shareholders, the employees and management of Swift expect the shareholders to support them.

At Heartland, everything is different because of the focus on operational excellence. The company is producing more than $100 million a year in cash. It’s no secret how it does it. The CEO explains: “We distinguish ourselves by operating a new fleet of well-maintained equipment, industry-leading driver pay, and outstanding federal Compliance-Safety-Accountability scores.”

Heartland is constantly the highest-rated trucking firm in the country. It was 2013 FedEx carrier of the year with 99.8% on-time delivery. Again, the CEO explains exactly how they do it: “The achievement of our goals can only be attained through the hiring and retention of the best drivers in the industry.”

Management seems willing to spend heavily on the things that matter and nothing on anything else. And that’s the company’s key competitive advantage.

There’s a fascinating correlation – one that won’t surprise you – between great business operators (like the guys at Heartland) and companies that are focused on creating shareholder value. Management owns 47% of the common stock. Its interests are aligned with yours, as the shareholder.

Over the last five years, Heartland has paid $441 million in cash dividends. And it has purchased more than 12 million shares of stock ($180 million), reducing the shares outstanding by 12.6%.

Thus, merely by receiving the capital returned to you by the company itself, you would have earned about 40% in five years. Price appreciation (capital gains) is all “gravy.” But there was plenty of that, too… Since December 2012, when Heartland first appeared on our list of capital-efficient companies, its shares have gone up around 50%.

Heartland’s returns dwarf the returns available to shareholders in other trucking companies. And here’s the crazy part: Until a recent spike in Heartland’s share price, investors could have bought the company for $13 per share (it’s now almost $20) – and at a price-to-earnings (P/E) ratio far lower than Swift’s.

In short, the market rarely recognizes the value of the differences between companies that I’m explaining here. And that’s your edge. This knowledge gives investors who understand capital efficiency an almost unbeatable advantage.

Please understand… I’m not suggesting that you would want to buy Heartland now and hold it for the next three decades – especially not at its current price. Managerial excellence is difficult to depend on over long periods of time. Like Buffett explains, you should prefer to own a business that’s easier to manage – that could be run “by monkeys.”

I’m only using Heartland as an example to show you how these often-overlooked differences in a company’s operations can make a huge difference in the returns available to shareholders over time. And over the long term, given Heartland’s advantages, I’d expect it to vastly outpace the S&P 500 – which it has done lately: 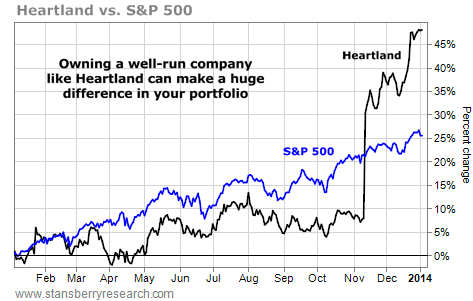 If you can learn to beat the S&P 500 over time with a trucking stock by focusing on capital efficiency, then by focusing on businesses with higher gross margins and less capital requirements, you can do even better.

That’s the big secret… the one I will work hard to teach my children… and the secret that guides my personal investing. Each year, I try to find one high-quality, supremely capital-efficient company to buy and hold forever. I can diversify this portfolio over time, adding only one stock each year. This will allow me to manage risk without having to sacrifice quality.

I believe this is the safest way to earn 15% or more on my portfolio, year after year.

If you will adopt this strategy for at least a portion of your savings, it is overwhelmingly likely that you will succeed, too – assuming you refuse to pay too much for the stocks you buy.

Here’s the best part. If a significant portion of your wealth is invested this way, you never have to worry about what the market is going to do. Take me, for instance. I’m sure to make good profits, year after year, no matter what happens to the stock market simply because of the cash being generated by the companies I own.

I value the stocks I own the same way I value my own company – by the amount of cash it generates for its owners every year. I couldn’t care less about the market price, as long as I know that the company continues to gush cash from operations and as long I can trust the managers. With that out of the way – with all of my fear removed – I can concentrate on capitalizing on the opportunities created by the market’s volatility.

Most investors will never have this advantage. And therefore… they will never be able to use the other profitable tools we also write about.

The lesson is simple: Take care of the basics first. Make sure your money is compounding at an acceptable rate. Once that’s covered, you’ll be in position to invest successfully using other tactics.