There’s a big argument going on between lots of smart people about the recent rise in interest rates.

Some view the rise as a good thing.

They say it shows the economy is improving.

[ad#Google Adsense 336×280-IA]And since rates are still at historically low levels, a little pop higher isn’t any cause for concern.

Other folks – like me – see things a little bit differently.

A sharp and sudden rise in interest rates has always preceded an important top in the stock market. 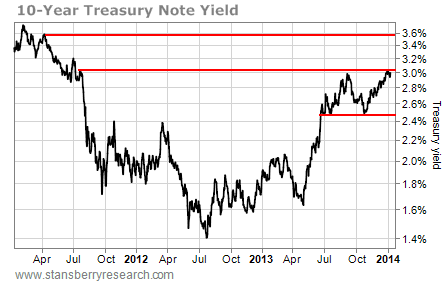 The yield on the 10-year Treasury note has rallied from 1.6% last May to nearly 3% now. That’s a remarkable increase in a short period. Right now, the yield is bumping up against long-term resistance at 3%. That’s the highest level in two and a half years. If it breaks above that resistance, there’s nothing to hold rates back from an immediate move up to 3.6%.

That still seems cheap from a historical perspective. After all, the 10-year rate was as high as 6% back in 2000. But debt levels are much, much higher now than they were back then.

That’s the allure of falling interest rates. It doesn’t cost anything to take on more debt. So we pile it on.

The problem happens once we’ve leveraged ourselves up to our eyeballs and then rates start to rise. For the sake of comparison, if we take the total Federal debt of $17 trillion and assume interest is charged at the current 10-year rate of 3%, the interest burden is 50% more than it was in 2000. It’s also 50% higher than it was at the start of 2013.

Bump the rate up to 4%, and we’ve doubled the interest burden.

It doesn’t matter that rates are at historically low levels. What matters is the total amount of debt outstanding and the future direction of interest rates. Both of those factors are flashing giant warning signs right now.

Total margin debt on the New York Stock Exchange rose to a record of more than $423 billion in November. So despite the uptick in interest rates, investors continue to borrow record amounts of money to throw into stocks as the market hits new all-time highs.

This sort of action has always ended badly for stocks in the past. It will end badly this time, too.