Is the bear market in natural resource stocks over?

As regular Growth Stock Wire readers know, 2013 marked almost the second full year of a bear market in natural resources. This is the longest resource bear market in over a decade.

[ad#Google Adsense 336×280-IA]The Chinese economy, which is a major consumer of resources, slowed down.

This soured investors on the idea of owning resource equities.

Also, precious metals are down big from their 2011 highs.

For 2013, this index was heavily weighted toward oil and natural gas… with 10% in natural gas, 15% in crude oil, and 7% in refined products like gasoline. Metals made up another 30%. Gold made up 10% by itself. The rest of the index included agricultural commodities, like wheat and corn. 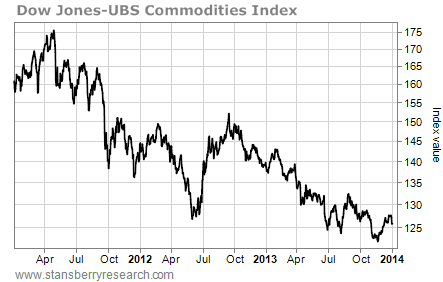 But I think this bear market is over. As we showed last month, China’s commodity demand is picking up again. This will play a major role in boosting demand for commodities overall. Also, price action from several major resource stocks tells us the bear market is likely over.

First, we’ll note diversified resource giant BHP Billiton (BHP). It’s one of the first stocks large-money managers think of when they talk resources. It’s a good gauge of the resource sector in general. As you can see from the three-year chart below, BHP suffered from early 2011 to mid-2013. But shares have refused to budge lower than the $55-$60 area. 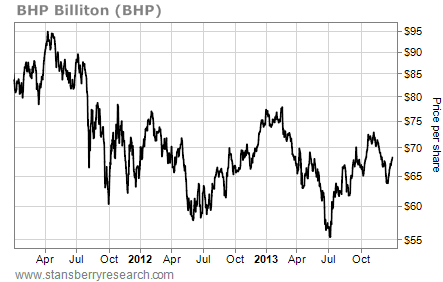 Second, let’s look at Freeport-McMoRan (FCX). It operates the world’s largest copper and gold mine. Like BHP, it represents the resource sector as a whole. After falling from early 2011 to mid-2013, shares have stabilized. 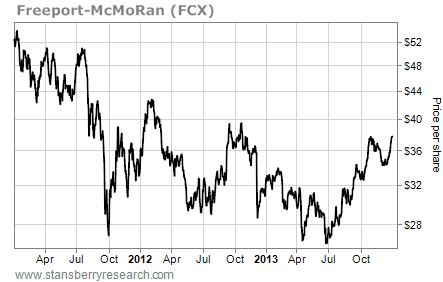 Remember… natural resources are tremendously cyclical. That means their prices move in waves. They go through big booms and busts. The best time to buy natural resources is when everyone hates them. And nothing makes investors hate stocks more than a long bear market, like the one we’ve recently seen.

We have some fantastic investing opportunities across the natural resource space. I particularly like uranium, platinum, palladium, agriculture, and natural gas.

If your portfolio doesn’t have any natural resource companies in it yet, don’t wait too much longer. As we’ve seen from several resource giants, the bottom is likely in… And for many of these stocks, a boom will follow.