Treasury-bond prices are closing out 2013 near their low of the year. But the junk-bond market is going in the opposite direction. 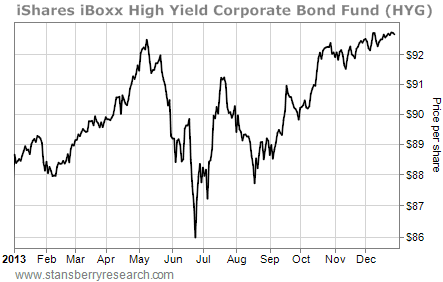 HYG invests mostly in corporate bonds rated BB and lower. That’s the so-called “junk” bond category. These bonds carry a higher risk of default. So they tend to pay a higher interest rate to compensate investors for that risk.

[ad#Google Adsense 336×280-IA]Since June, while longer-term Treasury bonds have lost about 10% of their value, junk bonds have gained about 5%.

In other words, investors are selling the safe stuff, and they’re taking on risk.

We’re at the point now where the premium of long-term Treasury bonds over junk bonds is as low as it was back when the stock market peaked in 2007, and just before a major correction in 2011. 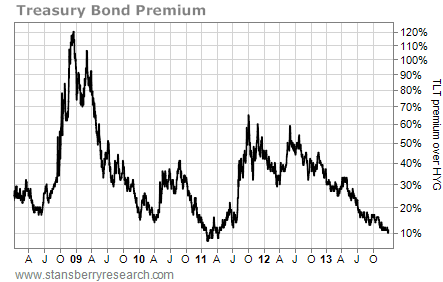 On average, TLT trades at about a 40% premium to HYG. In times of excessive risk aversion – when investors are looking for the safest investments possible, like during the financial panic of late 2008, TLT will trade at a much higher premium.

When investors are comfortable, though, it’s a different story. The Treasury-bond premium to HYG nearly evaporates.

Right now, TLT trades at a mere 10% premium to its junk bond counterpart. When you combine that with the historically low level of the Volatility Index and the record-breaking level of margin debt, it’s clear investors have developed a renewed appetite for risk.