On December 23, just five days from now, we “celebrate” 100 years of a currency system controlled by a select few private corporations.

In 1913, a bill passed through a poorly attended Senate session… and was rushed to the White House, where Woodrow Wilson signed it into law that same night.

It established the Federal Reserve… which is not technically owned by the federal government, nor does it have any actual reserves.

[ad#Google Adsense 336×280-IA]Today, the Federal Reserve is a fixture in our economy.

It controls the quantity and frequency of currency issued by the United States.

Take a dollar bill out of your wallet and notice what it says on the top, “Federal Reserve Note.”

That currency is what we use to transact business in our lives.

It is also what we get paid in when we work hard or take risks.

The Federal Reserve enjoys a great reputation. Every few months, the chairman visits Congress. He gives a speech on the condition of the nation’s economy. Markets wait patiently for his statements and hang on his every word when the Fed issues policies. (This afternoon, you’ll see the chairman’s latest pronouncement.)

When it comes to the Fed, people assume that the experts are handling things. They forget that the Fed is a cartel, and the purpose of forming a cartel is to protect its members…

The Fed primarily relies on two tools to drive its monetary policy. First, it can adjust the “federal-funds rate,” which is the short-term rate banks pay to borrow funds from each other overnight. Nearly all interest rates – mortgages, corporate debt, etc. – are linked either explicitly or implicitly to the federal-funds rate. So when the Fed lowers rates, the cost of borrowing drops for everyone. When rates are low, folks build more cars, buy bigger houses, and start new businesses.

The Fed can also manipulate the economy by purchasing or selling Treasury bonds. The Fed has to create new money to pay for Treasury purchases. And conversely, when the Fed sells these bonds, it essentially takes currency out of the system.

Money for nothing might sound like a good idea. But both of the Fed “tools” are inflationary. They make every one of your dollars less valuable…

When the Fed lowers interest rates, it is essentially bribing people to spend more money. When more people have more money to spend on the same goods and services… they will inevitably bid prices higher.

This is what happened with the recent housing crisis. With rates low, banks were encouraged to lend at a record pace. Suddenly, everyone could borrow money for record-low rates and buy “more house.” Real estate prices soared around the entire country. Of course, we later learned the banks had been loaning to folks who couldn’t repay. The inevitable slew of defaults drove home prices down and sent our country into a deep recession.

Since December 2008, the Fed’s nominal interest rate has effectively been 0%. Since the Fed can’t lower nominal interest rates below zero, the only tool it has left to manipulate the currency is “quantitative easing.” So for the past several years, the Fed has been printing money in an effort to “ease” our way to prosperity.

Has it worked? As we explained in October, quantitative easing has been a godsend for some:

And for the very, very rich… Bernanke did even more, God bless him. Bernanke dropped real interest rates well into negative territory. That allowed the world’s wealthiest capitalists – like renowned investor Warren Buffett and Stephen Schwartzman, head of the private-equity firm Blackstone Group – access to unprecedented amounts of capital at rates of interest that literally paid them to borrow.

They did the only logical thing… they responded with a wave of leveraged buyouts that dwarfed every other private-capital cycle in history… This was a massive aggregation of wealth. Almost none of these deals would have been possible without Ben Bernanke’s policies…

Yes, for rich people all around the world, Ben has been a living saint. Thank you, Ben! We couldn’t have done it without you! None of us ever thought we’d be quite this rich… or end up owning all of those incredible assets.

The same thing is happening with businesses. People like to debate whether quantitative easing has helped small businesses. But it has clearly helped the “too big to fail” banks get even bigger. Last month, Forbes made a list of 29 banks that were “too big to fail.” And topping the list… JPMorgan, the namesake bank of the man who helped drive the Federal Reserve’s creation 100 years ago.

Along with Citigroup, Goldman Sachs, and other big banks, JPMorgan is one of the Fed’s “primary dealers.” These dealers act as the Fed’s agent at Treasury auctions and in other markets. Under the current system, once the dealers buy the government bonds, they sell them to the Fed – for a slight profit, of course.

Not only do they profit from every Treasury bill the Fed purchases… but many people believe that their “seat at the table” offers the Fed’s primary dealers insights into – and even influence over – our nation’s monetary policies. The Fed has become a cartel with membership privileges.

Quantitative easing has re-inflated the entire banking system. The chart below tracks the balance sheets of the Federal Reserve. Notice that assets (the black line) have ballooned from around $900 billion to nearly $4 trillion.

Meanwhile, JPMorgan has seen its assets grow from $1.6 trillion in 2007 to $2.5 trillion today. That is 58% in just a little more than five years. It has also seen earnings per share (the gray line) grow by 43% over the same period. 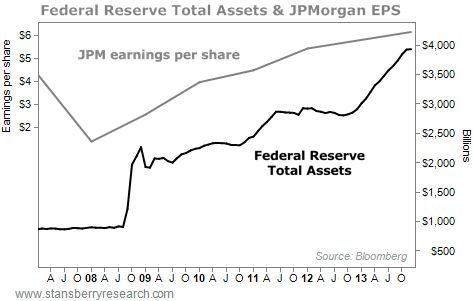 Meanwhile, Federal Reserve manipulation of the dollar has undermined the lives of millions of Americans. It has driven down the standard of living for the average American in two key ways. First, the average household is earning less money at a time when prices are increasing. 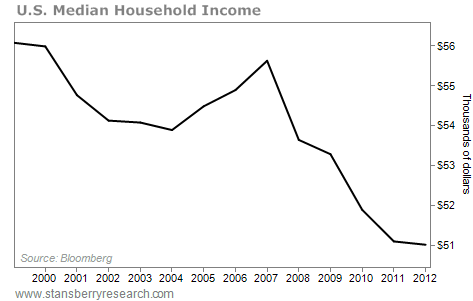 Second, it’s nearly impossible for people to protect the value of any extra cash they can save. The cash that is left in bank accounts will buy less next year than it does today.

The Fed has set interest rates so low, it’s impossible to earn a decent return. Remember, all interest rates are tied – either directly or indirectly – to rates set by the Fed. This is great for the banks that own the Fed. They get to borrow for 0% and lend to the rest of us at 4% or 5%. But it’s terrible if you’re trying to hang onto your savings for retirement 15 or 20 years down the road.

In short, the Federal Reserve has changed the markets. It has also changed how we invest. There are considerations today that we would never have imagined 20 years ago. It is no longer enough to study business cycles and company fundamentals. We have to consider the unintended consequences of quantitative easing…

Tomorrow, I’ll show you the results of a study we just conducted on what will happen when the Federal Reserve begins to rein in its quantitative-easing bond-buying policies. This is what people refer to as “tapering.”

We looked at how the Fed’s previous exits from the bond market have influenced every sector of the stock market – and how “tapering” could affect our recommended stocks.

Specifically, we studied more than 2,000 stocks across 39 industry segments. We spent dozens of hours on this analysis (which we’ve seen nowhere else, by the way).

We found there wasn’t a single sector of the stock market that had gone up, on average, during the last three Federal Reserve “taper” periods.

But we did find a “window” of opportunity. I’ll show you exactly where in my next essay…