[ad#Google Adsense 336×280-IA]Many Dividend Growth investors focus on companies that are just beginning their dividend-growth streaks, reasoning that they have more potential for future increases.

Companies declaring an increase for a fifth straight year are now “graduating” to Challenger status, so they are now “on the radar” of many such investors, and there is a large “Class” of such companies scheduled to graduate in 2014.

In fact, recent graduations have included such companies as Cantel Medical (CMN), Excel Trust (EXL), Lexington Realty Trust (LXP), Montpelier Re (MRH), and Ralph Lauren (RL), each of which will pay its increased dividend in January.

Unlike high school or college graduations, the transition to Dividend Challenger status can happen at any time throughout the year and there are currently about 130 firms poised to do so in 2014.

The announcements can come anywhere from two days to more than two months before the Ex-Dividend Date, so I try to look ahead by about 11 weeks to provide adequate “warning” of the good news to come. Currently, that means companies with Ex-Dividend anniversaries through the middle of February. With that in mind, here are the next group of companies that should boost their payouts, based on last year’s dates: 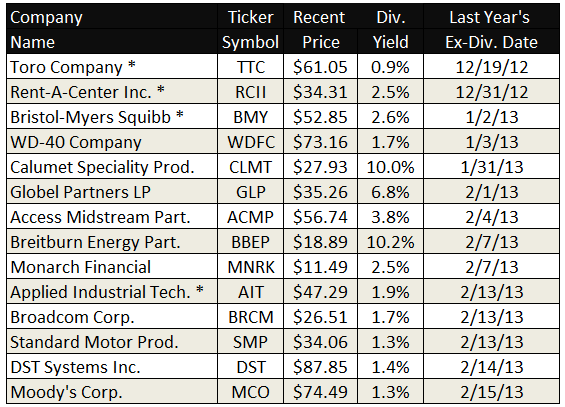 High Probability Increases?
The repeatability factor for CCC dividend increases is about 90%, which inspires some confidence. Keep in mind, though, that the companies above are just reaching a fifth year of increases, so they haven’t yet established as strong a dividend-increasing “culture” and might be more inclined to cut or freeze the payout during recessions.

Additional caution may be advisable for high-yielding companies and potential investors should keep in mind that Master Limited Partnerships (MLPs) and Real Estate Investment Trusts (REITs) pay distributions that are not taxed the same as “normal” dividends.

Later in February, additional graduations to Challenger status should include companies such as Equifax (EFX)*, Mattel (MAT)*, and United Parcel Service (UPS)*. As the year progresses, they’ll be joined by the likes of Home Depot (HD)*, Staples (SPLS)*, and Hershey (HSY)*, all familiar names offering solid fundamentals.