One in every 10 light bulbs in the United States gets its power from Russian fuel. It’s been that way ever since 1993, when the Megatons to Megawatts program began.

Under this agreement, the highly enriched uranium (HEU) contained in ex-Soviet nuclear weapons was downblended and converted into nuclear fuel.

[ad#Google Adsense 336×280-IA]And the world got a cleaner, less dangerous environment, as around 20,000 warheads were stood down.

But this era is rapidly coming to a close.

By the end of December, the deal that helped provide about half of all commercial nuclear power in the United States… will simply end.

As the world turns away from coal and toward nuclear, demand will increase – by more than double, as the chart below shows. The current uranium picture will reverse, moving quickly from glut to severe shortage.

These events mean that, starting in 2014, 13% of global uranium supply will simply dry up.

And not just uranium, but high-grade uranium. That’s a serious challenge to replace.

America’s nuclear plants, all 104 of them, consume a whopping 43 million pounds of uranium every year.

There are 435 nuclear reactors in the world, with another 66 under construction. That’s 15% more than are currently operating. By some estimates, 408 more will be added in the next couple of decades.

China already has 26 projects under construction, and 30 more are planned. That nation’s expected to account for as many as 90 of the more than 400 future reactors.

The United States, India, South Korea, Russia, and a host of others will be adding new facilities and increasing capacity at existing plants in the coming years.

Despite Japan’s tragic Fukushima disaster, the huge cost of importing liquefied natural gas (LNG) has caused that nation to do its best to restart some of its own nuclear reactors.

The outlook is simple. We’re going to need to produce more uranium. A lot more…

The question is: Can this uranium be produced cost-effectively?

What You Need to Know About Uranium Prices

Through all of this, uranium prices – both spot and long-term – have been struggling since early 2011. 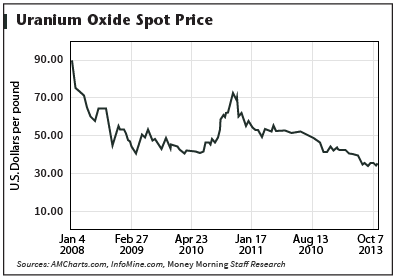 But here’s what you need to know about the uranium price: although the spot price (currently $36/lb.) is the one most often quoted, as much as 85% of all uranium is sold under long-term, multi-year contracts (currently averaging about $50/lb.).

The other salient point is that, according to some experts, it actually costs $85/lb. to produce. 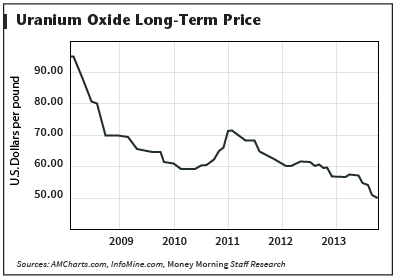 So the average miner is losing about $50 on every pound of uranium sold at spot and $35 for each pound sold on a long-term basis.

How long do you figure that can last, really?

On Sale, for Now

Nuclear fuel is so concentrated, that just 0.035 ounces of uranium packs the power of three tons of coal.

Besides, it’s a lot cleaner and produces far less carbon emissions than many alternatives, a fact growing numbers of environmentalists have come to accept.

President Obama himself said he was “Looking forward to working with Congress on implementing policies that ensure that our nation can continue to rely on carbon-free nuclear power.”

And uranium producers won’t keep losing money indefinitely. The price simply has to rise, and here’s how we can benefit.

The Best Uranium Play in the World

Uranium Participation Corp. (TSE: U) is a physically backed uranium ETF. The fund’s manager simply buys uranium oxide and uranium hexafluoride, with the purpose of selling those holdings in the future.

While there’s no leverage like that which comes with uranium miners, U.P.C. also carries little more than uranium price risk.

And right now, spot uranium is changing hands at a 60% discount to the cost to produce it – never mind turning a profit.

Current low prices are a disincentive to build new supply, as well as to expand mine output.

The Megatons to Megawatts program was clearly a win-win arrangement, but it’s over.

That means about 13% of global supply, 24 million pounds of high-grade uranium, is about to be erased.

This situation cannot last. Uranium prices must rise… which makes Uranium Participation Corp. (TSE: U) the best uranium play there is.