But almost nobody has noticed…

“Bad to less bad” might not sound like much – but it is where investors can make some of the biggest gains investing.

[ad#Google Adsense 336×280-IA]Our opportunity is in some of Europe’s most out-of-favor countries – Greece, Italy, and Spain.

And that is starting to happen now.

I first wrote about investing in European stocks last year.

You see, even after their big moves, these stock markets are still cheap! 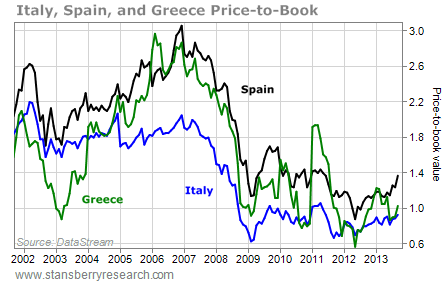 These countries trade for an average price-to-book value of around 1.1 today. That’s dirt-cheap. For perspective, European blue chips trade for a 30% premium to that price, and U.S. stocks are more than twice as expensive.

So while all three of these countries have hit multiyear highs, they are still incredibly cheap – well below their pre-financial-crisis highs.

In short, we’ve got a group of cheap, beaten-down stock markets. The average investor has given up on them. But now, for the first time in years, they’re soaring. And they still have plenty of room to run.

You see, things are getting “less bad” in Europe. The continent as a whole is slowly pulling itself out of a multiyear recession. And while Europe still has a lot of long-term structural issues (with big debt loads, rigid labor laws, and chronically high unemployment, to name a few), investors are just starting to warm up to the idea of taking on risk in Europe.

It is truly a “bad to less bad” situation. And the “worst of worst” countries are now providing the biggest gains.

The idea of buying European blue chips last year was difficult for most people to swallow. But it was the right call… the fund I recommended soared by 42%.

Now, we have a new “bad to less bad” opportunity in Europe’s “worst” countries – with a much higher potential return.

I know it’s scary to think about, but that’s what makes this such a great opportunity.

Greece, Spain, and Italy are cheap and hated… and they’ve just started an uptrend. Things are going from bad to less bad.

Now is the time to jump in.