You shouldn’t worry so much…

Right now, my readers are worried. A lot of them are near retirement… And they’re concerned that U.S. government policies are about to trigger a major inflation, which will destroy the value of their savings.

The rest of them are worried the U.S. economy is in the dumps and about to get worse. They’re watching for a recession… even a depression.

If this sounds like you, take a page out of what I’ve been telling my readers…

Let me show you…

This bull market and the economic recovery that has accompanied it are different than any other.

First, the recovery has been painfully slow, yet consistent.

It still has miles to go before employment gets back to regular levels.

Here’s how jobs have recovered after previous recessions: 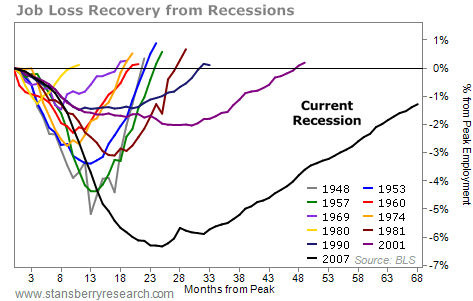 In all but two recessions, all the lost jobs were regained in about 30 months. It has been 68 months since the most recent recession, and we’re still not back to even. I expect the slow trend higher to continue.

This means that we’re well behind the country’s “potential” GDP based on its average growth rate. 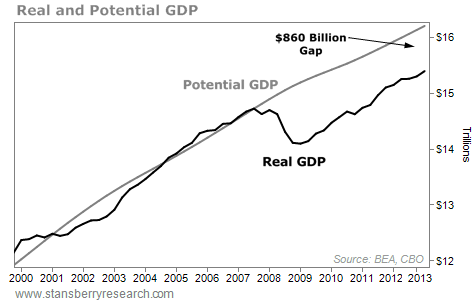 Standard economic reasoning suggests that we might close that gap, while seeing excess economic growth until it is closed.

There are two big things to take away from both these charts:

1. The trend is higher. Things are getting better. We’re not headed into a recession.

2. It’s happening slowly. As long as growth is modest, inflation shouldn’t be a major problem.

Buy rock-solid dividend-payers that will survive in good times and bad. Put a portion of your portfolio in safe, fixed-income assets, like municipal bonds. Keep a small amount of money in “chaos hedges,” like gold and silver. And sell options on cheap, high-quality businesses.

I don’t know what next year will bring… I can’t predict business cycles. But I don’t waste time worrying. I look at the facts and stick to the plan.