Natural gas prices have gained nearly 100% since bottoming in 2012.

And that’s great for coal-stock investors…

Last week, we discussed how the coal sector is currently going from “bad to less bad.” Coal prices have declined… sentiment toward the sector is terrible… and many coal stocks have fallen more than 70% from their highs. The flagship U.S. coal producer, Peabody Energy, saw its shares fall 80% from its high in April 2010 to its recent low in June 2013.

[ad#Google Adsense 336×280-IA]Longtime readers know that we like to buy commodity producers when they become deeply depressed and cheap.

Most investors simply quit on the stocks when that happens.

They sell in disgust and go somewhere else. Contrarians step in and buy.

That’s the situation we are in with coal today.

Things are still bad in the coal sector… but coal-stock prices have staged a small rally recently.

The key for that rally to continue, and for the sector to get progressively better, is natural gas prices. You see, the major use for both coal and natural gas is as a fuel to make electricity. The two fuels compete… much like gas stations on opposite corners of the same intersection.

Power producers buy both coal and natural gas on a “heat content” basis. In other words, how much heat they get from a ton of coal or a thousand cubic feet of natural gas. We measure heat content in millions of British thermal units (mmbtu).

Comparing coal and natural gas prices on an energy-equivalent basis isn’t simple. The heat content of coal from major coal-producing regions is different.

To understand the heat content, we need to break down coal into its three major source areas: Appalachian coal (from Pennsylvania and West Virginia), Illinois Basin coal (from Illinois), and Powder River Basin coal (from Wyoming and Montana).

This table shows the heat content from the three major coal-producing regions in the U.S:

Since then, prices for natural gas soared. They are currently about 100% above the low. Prices are up only 10%, 15%, and 24% for Appalachian, Illinois Basin, and Powder River Basin coals, respectively. That means some power companies can switch back to coal from natural gas and use cheaper inputs. 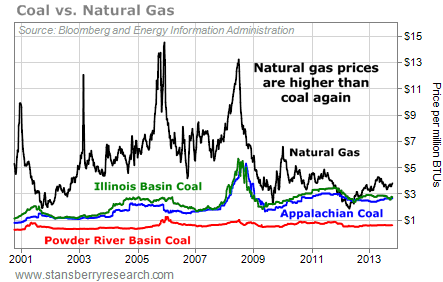 I expect this trend to continue. Natural gas demand is soaring right now, but oil companies are looking for oil. While there is still a large volume of natural gas production, supply isn’t increasing as fast as it did in 2011 and 2012. Prices shouldn’t fall back to their 2012 low. That’s bullish for coal prices.

Even if natural gas prices remain at their current level, coal prices could rise. That will push coal miners’ earnings higher… and push stock prices up, too. These stocks could run a lot higher, because they are cheap today.

Arch Coal is a more speculative company, but its shares are cheaper than Peabody’s. It trades at a price-to-book value of 0.3. Its shares could go up nearly 300% to reach their five-year averages.

Coal stocks are cheap… The sentiment toward them is terrible… And it’s a great time to get long.

Sponsored Link: In my next issue of the S&A Resource Report, I’ll tell you exactly how to play coal. I found the best company for investors to take advantage of the uptrend both in the U.S. and abroad. If you’re interested in investing in coal, this issue is a must-read. We plan to publish the issue on Wednesday, November 6. To make sure you’re on the subscriber list to receive it, click here to sign up for a subscription (with a 100% money-back guarantee).