Investors have a rare opportunity – one that should never exist – right now.

Today, we can buy some of the best, most cash-rich companies for ridiculously low prices. In fact, we can buy a basket of these businesses for a crazy 34% discount to the overall stock market.

Longtime readers understand that some of the biggest stocks on the planet are the best investment value today.

Recently, it was widely reported that technology giant Apple’s cash hoard was equal to roughly 10% of all the cash held by non-financial U.S. companies.

That’s crazy to think about, but it’s just scratching the surface.

The truth is, all the major technology giants are sitting on billions of excess dollars. 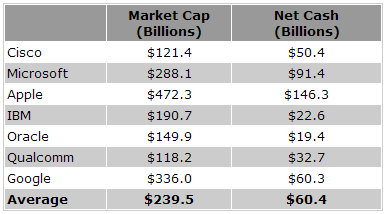 As you can see, Apple isn’t the only company holding a ton of cash. Aside from adding a layer of safety to these businesses, that makes all of the companies cheap…

For every share you buy, the company holds $9.40 in cash. With the stock at $22.50 per share, you’re really only paying $13.10 per share for the business. And this number is less than six times what the company is expected to earn next year. It’s dirt-cheap. And it’s not the only one… 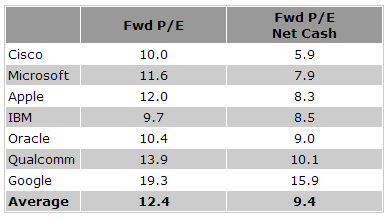 Said another way, these technology behemoths trade for a 34% discount to U.S. stocks.

Deals like this don’t come around often. So it’d be foolish not to take advantage. These technology giants could rise by 50% as a whole and they still wouldn’t be expensive.

I expect stocks in general to do very well over the next two years, and this group should easily outperform. Don’t miss it.